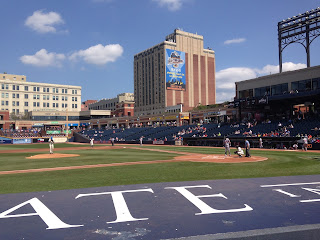 I haven't had much to report lately with new purchases to my collection. I've been focusing on set building lately (particularly the 2008 eTopps set that I mentioned in the previous post and the 2003 Fleer Authentix set that I'm working on now). Hopefully before the end of the year I can grab a few cards off my most wanted list and complete the 1950 and 1951 Bowman Reds team sets I started a while back. We'll see.

This past Sunday I took my daughter to see an Akron Rubberducks game and although it was hot, it was nice to just sit back and enjoy a game that I could care less who would win. Ultimately, Akron would go on to defeat the Richmond Flying Squirrels (cool name by the way) 8-2. While I was at the stadium I ran into Charles, a regular reader of my blog who I've sent cards to in the past. He currently runs the Northeast Ohio Chapter of the Reds Hall of Fame. This past May they were able to organize a meet and greet with Reds Hall of Famer Tom Browning. Unfortunately, due to prior commitments I was not able to attend. However, he informed me that they're in the process of lining up a visit with a member of the Big Red Machine. It wouldn't be one of the big four (Bench, Morgan, Perez, or Rose) but that still leaves Griffey, Concepcion, Foster and Geronimo. If you're interested in learning more about this organization you can follow them on facebook at https://www.facebook.com/neohioredshof/
Posted by Reds Card Collector at 5:22 AM No comments: 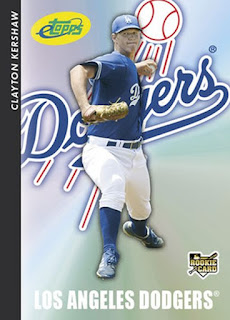 I'm just curious as to how many of us bloggers out there are worried about competing with our fellow collectors when it comes to acquiring cards. Case in point, I've always been fascinated with the concept of eTopps. The ability to purchase cards online, a limited print run, sealed and stored offsite with the ability to ship the cards to your house. It was a radical idea at the time that lasted for a decade before it became an afterthought to many collectors. I never collected any of the cards through the eTopps website. By the time I had learned about the cards the program had essentially ceased. Sure, you could still purchase cards from fellow collectors on eBay to have them transferred to your online eTopps portfolio but Topps had driven the cost of shipping those cards to astronomical rates that many collectors, I feel, just cut their losses and abandoned their account with many of these cards never to see the light of day.

Eventually I began to think how great it would be to try and actually build a physical set of eTopps cards. Instead of buying digital cards online and having them transfer to an eTopps account (to avoid shipping fees), I decided to start scouring eBay, COMC, Beckett, Sportlots, and Amazon to see if I could build a set from cards collectors already had in hand. My only stipulation was that the cards still needed to be sealed in their plastic case that Topps had sent them. I decided to settle on the 2008 eTopps set because I like the giant team logos in the background and the number of great rookie cards in the set. Joey Votto, Clayton Kershaw, Max Scherzer, Carlos Gonzalez, Chris Davis, Johnny Cueto, Evan Longoria, Jay Bruce, Daniel Murphy, and Clay Buccholz to name a few. In addition you have a nice collection of hall of famers (or soon to be hall of famers) with Ken Griffey Jr., Greg Maddux, Chipper Jones, Ivan Rodriguez, and Derek Jeter. The lowest print run in this set for a particular card is 499 (Carlos Gonzalez, Brandon Jones, CC Sabathia, Ivan Rodriguez, and Daniel Murphy). So theoretically there could only be a total of 499 sets ever assembled based on the print run, but because of the fact that there are team and player collectors that number shrinks drastically. Follow that up with the fact that due to the high cost of shipping eTopps cards, many of those 2008 cards will probably never hit the market. That got me thinking, realistically what could be the total number of sets ever assembled? My guess would be less than 25, but I could be wrong. I'm sure Patrick over at Radicards would be better able to run the numbers and give a more precise analytical answer.

When I first started chasing these cards down in January of this year I noticed that there were instances of only 1 card of a player being sold. I already knew that there were some cards in the set that were not even listed. I decided that if I could acquire at least 59 of the 69 cards that were produced, that would only leave me with 10 cards (or 14%) of the set to chase which seemed like a realist chance to succeed. Yesterday the last 5 of the 69 cards in this set showed up in my mailbox. You can see all of the cards by checking out my 2008 eTopps page under the pages section on the top right column of my blog. 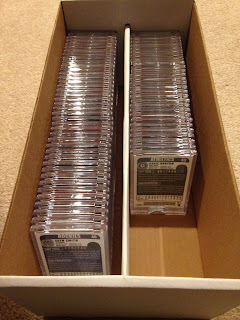 Anyone else out there working on a secret project?
Posted by Reds Card Collector at 9:22 AM 10 comments: