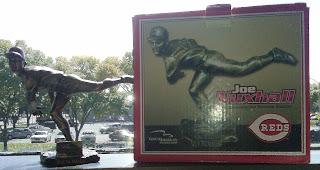 This is one of my most favorite stadium giveaways I have in my collection. The Reds gave out 30,000 of these bronze beauties on June 10, 2008 when the Reds were defeated by the Cardinals 7-2 The only highlight in that game for the Reds was a Votto home run in the bottom of the fourth inning. The Nuxhall giveaway represents a smaller version of the statue that can be found outside the main entrance to the stadium (along with Ernie Lombardi, Frank Robinson and Ted Kluszewski). Nuxhall made his major league debut with the Reds on June 10, 1944 giving up five runs before being relieved after a third of an inning in the ninth. He spent 15 of his 16 years in the majors with the Reds and was a two time all-star. After retiring from the field he began announcing games for Cincinnati. In 1974 he teamed up with Marty Brennaman to become one of the most memorable announcer pairings in Reds history. He retired from broadcasting in 2004, but continued to make guest appearances prior to his death on November 15, 2007.
Posted by Reds Card Collector at 9:34 AM 4 comments: 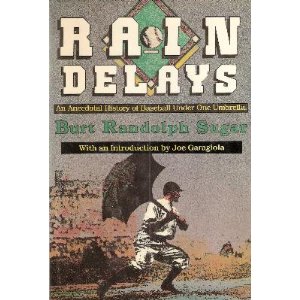 During the fall of last year my wife picked up a few baseball books for me while she hit the local Goodwill and Volunteers of America stores. While a few were hit and miss (such as Mickey Mantle's Quality of Courage) I did enjoy reading Rain Delays by Burt Sugar. Sugar does a decent job immersing readers in stories from summer days of long ago. While not one story stands out more than another, each was a unique trip back to when the national pastime WAS the national pastime. You won't find stories in here from the past decade, but you will find a treasure trove of tidbits that range from prior to the golden era of baseball to the psychedelic 70s. Definitely a good read if you're a fan of the game.
Posted by Reds Card Collector at 10:07 AM No comments: 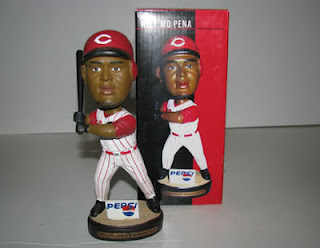 This bobblehead was given out to fans on June 8, 2005 when the Reds took on the Tampa Bay (Devil) Rays. I still miss Tampa Bay being called the Devil Rays...something about Devil making a team sound dark and sinister and we all need sinister teams in major league baseball. The Reds won this game in a slug fest and it was a fitting ending as Pena himself launched a two run homer in the bottom of the ninth to win the game for Cincinnati. Pena made his major league debut with the Reds on September 10, 2002 and singled in his first major league at-bat. During his stint in Cincinnati, Pena shared time in the outfield with Ken Griffey Jr., Adam Dunn and Austin Kearns. Pena was with the Reds until the spring of 2006 when he was shipped to Boston for Bronson Arroyo. Not a bad trade for the Reds if you ask me.
Posted by Reds Card Collector at 9:35 AM 2 comments:

A Must Read...Even if You're NOT a Tribe Fan

It's no secret that I'm a Reds fan. Born and raised in Cincinnati, I've spent more than ten years here in the Cleveland area when I transferred here due to a job offer when I graduated college. Over the years I have grown to love Cleveland. It's a city that still has a grittiness that's reminiscent of it's industrial heyday. The city has been clawing it's way out into a post industrial world slowly, but with much success. It's been great to watch the revitalization of downtown Cleveland... my adopted hometown.  One thing that has stood out to me since coming to Cleveland is the city's passion for it's sports teams. It doesn't matter where I'm at, there's always someone talking about the Indians, Browns, or Cavaliers. It's something I didn't witness much while I lived in Cincinnati where conversations involving the Reds or the Bengals were few and far between. Recently, I decided to make it a point to familiarize myself with as the history of the different franchises that comprise Cleveland sports.

A few weeks ago I began reading Our Tribe by Terry Pluto, a local Cleveland sportswriter who works for the Cleveland Plain Dealer. I wasn't expecting much when I began this book, just an intro into the follies that have haunted the Cleveland Indians since the 1950s. What I discovered, however, was a book that reaffirmed that baseball is not just a sport but an experience that's shared by generations, passed from father to son. As we grow up and grow apart from our Dad, when it seems as though we have nothing left in common, we can still talk about baseball. Pluto does an amazing job sharing the journey he had with his father growing up with Cleveland baseball. He takes the reader along as he details the joys and sufferings this town has witnessed with their ball club. But most importantly, Pluto allows us to see the final years he and his Dad share together in the mid 1990s as the Indians once again become a post season contender.
Posted by Reds Card Collector at 7:30 AM 2 comments: 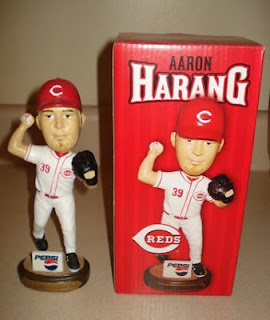 The Reds gave out this bobblehead on June 13, 2007 when the Reds took on the Angels. Unfortunately for fans, they witnessed a 6-3 loss to Los Angeles mostly due to Vladimir Guerrero feasting on Reds pitchers for 4 RBIs. Harang was with the Reds from 2003-2010. His best year with the Reds was in 2006 when he led the National League in strike outs (216) and wins (16) and complete games (9). It is disappointing to note that Harang didn't even place in Cy Young voting for the National League in 2006. One of the great things Harang started while in Cincinnati was Aaron's Aces, a ticket program for military families to attend Red's games every Sunday that Cincinnati is hosting a game at Great American Ballpark. Since Harang is no longer with the Reds, Harang's former teammate and friend Jay Bruce has decided to continue sponsorship. Harang is currently a starting pitcher for the Dodgers and while I wish he was still in a Reds uniform, I will continue to cheer for him no matter what team he may play for.
Posted by Reds Card Collector at 9:51 AM No comments:

Come on guys. Vote for Gregory Zakwin. He needs your support....and the Koufax!!!

You can cast your ballot here: http://www.beckett.com/news/2012/07/you-pick-who-wins-our-sandy-koufax-autograph/ 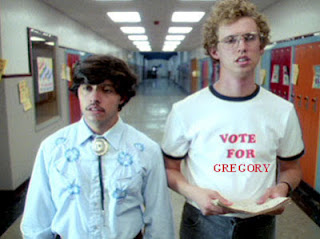 Posted by Reds Card Collector at 10:01 AM No comments:

I finally got around to adding the list of my autographed baseball cards to the blog today. I haven't tallied up what I have, mostly because I'm lazy, but I will say that I have over 100 thus far. Every single one of these autographs I obtained through the mail. I haven't had much time this year to send out requests, but hopefully within the coming month I'll do so. Feel free to check out my list here. I will be posting picks of each card as I get more time to scan them in. Look for them in future posts.
Posted by Reds Card Collector at 12:22 PM 1 comment: 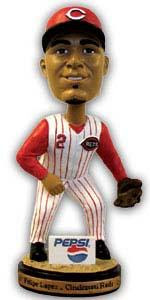 This was the first bobblehead the Reds gave out in the Power of Tradition series back in 2006. There were a total of three in the series with Larkin and Concepcion rounding out the other two. I felt bad for Lopez when he came to the Reds for the simple fact that he had big shoes to fill at shortstop with Larkin's retirement. Lopez had some decent numbers in 2005 and was selected to the All-Star game that year, but 2006 was a different story and by mid season he was dealt to the Nationals. This nodder was given out on May 24, 2006 when the Reds took on the Brewers. Unfortunately, fans in attendance of the game watched the Reds fall to the Brew Crew 6-2.I guess they all can't be winners can they.
Posted by Reds Card Collector at 9:57 AM No comments: