Ticket to a Coronation! 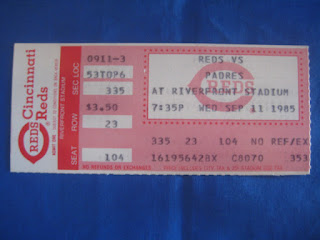 In addition to collecting cards, I always like to add pieces of Cincinnati Reds history to my collection. Whether it's a piece of astroturf or stadium seats from Riverfront Stadium, or even World Series tickets from a championship year, it's always great to memorabilia of significant importance as it relates to the Reds. I've been searching for quite some time for a ticket from a game held at Riverfront on September 11, 1985 but didn't have much luck in locating one in my price range. After a lot of patience one finally appeared on eBay for a price that I thought was reasonable. I'm extremely excited that this ticket is now in my collection. So, what was special about September 11, 1985 you ask? It's the night that Pete Rose recorded hit 4,192 to surpass Ty Cobb as the leader of all-time hits in major league baseball to be crowned the "Hit King". I think this will complement my Pete Rose PC nicely.
Posted by Reds Card Collector at 5:41 AM No comments: 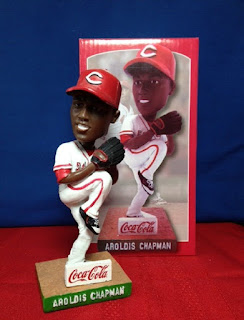 I recently purchased this bobblehead of former Reds closer Aroldis Chapman. This makes the 35th bobblehead in my collection and my first Coca-Cola sponsored nodder. There were 25,000 of these nodders that were distributed to fans on June 4, 2014 when the Reds hosted the Giants. For those interested, Cincinnati lost to San Francisco 3-2.

I'll admit that it's tough seeing the "Cuban Missile" in blue pinstripes. Every time I saw Chapman pitch for the Reds I was enthralled with the speed of each pitch and the radar gun registering triple digits. When the club dealt Chapman to the Yankees last off season it was a tough pill to swallow, especially since it appeared then didn't get much for him. But I learned to live with it since he was in the American League and my Reds didn't have to face him on a regular basis. You can imagine my disappointment when it was announced in the middle of the season when it was announced that the Cubs had acquired him from New York. It's not that I dislike Chapman, it's that I dislike the idea of having the Reds face their former flamethrower. Now that the regular season has wrapped up and the post season begins tonight I will be rooting for the Cubs to win the World Series. Going more than 100 years without a championship is rough for any team. Once the post season is over, I'll be hoping that Chapman finds his way back to the American League where he won't pitch against Cincinnati as much.
Posted by Reds Card Collector at 9:51 AM No comments: