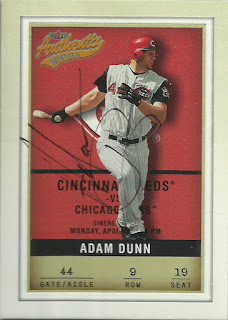 Did you know that Adam Dunn set a National League rookie record for the most home runs in a month by hitting 12 in August 2001?
Posted by Reds Card Collector at 10:06 AM No comments:

Email ThisBlogThis!Share to TwitterShare to FacebookShare to Pinterest
Labels: Adam Dunn, Through the Mail 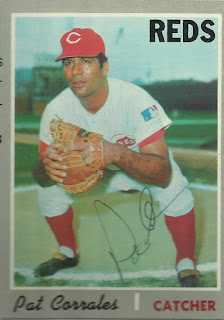 Did you know that Pat Corrales become only the fourth manager to manage in both leagues in the same season?
Posted by Reds Card Collector at 9:47 AM No comments:

Email ThisBlogThis!Share to TwitterShare to FacebookShare to Pinterest
Labels: Pat Corrales, Through the Mail 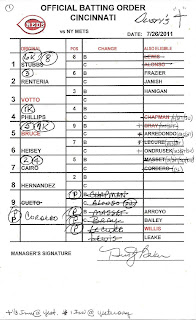 Very excited that I picked up this item. I've always wanted a piece of baseball memorabilia that was game used (although not in the sense of being out on the field - but the dugout is the next best thing). I did some research on this card before pulling the trigger and found out that during the game Votto hit a 2 run homer and Chapman struck out two batters in his brief appearance on the mound. This would have been even sweeter had the Reds chalked up a "W" but I guess that's asking too much. Another score for my Reds collection and a nice addition to my man cave. Speaking of which, I found a nice video of a Detroit man cave that's nicely done. I hope I can have mine finished someday soon.

Posted by Reds Card Collector at 9:48 AM 2 comments: