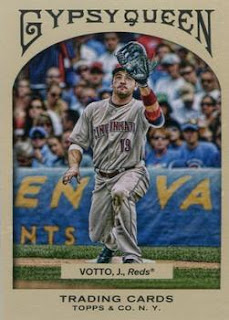 Thinking back through all your years of collecting, has there ever been a moment when you've regretted something you've done? For me, my biggest regret was selling my 2011 Topps Gypsy Queen set. I know a lot of people don't show love for this set but this was a huge set for me in 2011. I love the fact that a retro set Topps created had a nice mix of old and new players. The standard baseball statistics that are the hallmark of traditional baseball cards were nowhere to be found on these cards. You had to read the small narrative on the back to glean any pertinent information from the player pictured on the front. Speaking of pictures, this wasn't your run of the mill standard photography but rather filtered photographs to make the images appear old. Lets not forget about the different insert sets and autographs that grace this product. The Great Ones, Future Stars, Home Run Heroes, Sticky Fingers and Wall Crawlers are all fantastic subsets and complement the base set nicely.

While all of the things I've mentioned about 2011 Topps Gypsy Queen are about the design of the card, it's the memories and experiences I had in 2011 when I was putting this set together. 2012 was a rough year for me. I the course of eleven months I lost my Dad, an Uncle, an Aunt and my best friend. To say that 2012 was a terrible year would be an understatement. 2011 was the last year I spent with those I lost the following year and while I can't say I did anything spectacular with them that year, it's the simple things I remember. Whether it was going to the Indians game with my buddy Jeff when the Tigers were in town (Jeff was a huge Detroit fan since he was originally from that area), or spending the last Christmas with my Dad and talk about life in general. Thinking back, 2011 was a great year for me because it was the year I was able to say goodbye to to them.

It's funny how holding a little piece of cardboard can open a floodgate of memories that you once thought lost as time has passed by. But everytime I hold a 2011 Gypsy Queen card a memory from 2011 will come racing back into my conscience. So, what's that point of this post? Well, I decided to once again chase the 2011 Toppy Gypsy Queen set. This will probably be the last set that I put together as a collector (unless Topps were to release something so revolutionary that I couldn't resist...but I highly doubt it unless more companies enter the arena with an MLB license). One thing's for sure, I'm sure I'll be making new memories as I build a set that helps remind me of past memories that I'll always cherish.
Posted by Reds Card Collector at 10:10 AM 6 comments: 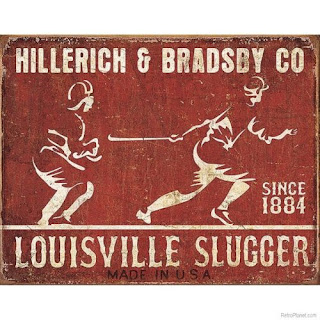 And it opened up my eyes!  Here's the latest purchase for the man cave. This Louisville Slugger tin sign is fantastic on so many levels. It's the same color as my baseball team, it looks old, and it's a representation of the true American pastime (I still don't acknowledge football as holding that title). With this addition, there are only a few more items left to purchase and I'll be ready to show off the room. Just bear with me as I wrap it up and have it ready to show in the coming weeks.

Posted by Reds Card Collector at 12:04 PM No comments: