It amazes me just how generous the members of our blogging community are. I read all the time about packages many of you receive from others containing cards that are now permanent fixtures of you collection. Case in point, last week I received two packages. The first was from Jared over at Cards My Mom Didn't Throw Out. He contacted me about an Alex Rodriguez relic card he had that I needed for the 2003 Fleer Authentix set build. Not only did he send the relic, but also a TON of Reds cards. Shock and awe! There were a ton of Heritage Reds cards in there as well as a nice mix of Stadium Club. The 2016 Chrome Sepia Stevenson Jared sent has me pondering chasing that parallel set once I have a few other projects wrapped up. 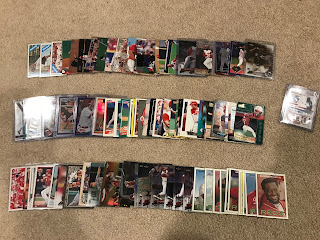 The second package I received was from Fuji over at The Chronicles of Fuji. Fuji always has a nice mix of oddballs in his packages and this one didn't disappoint. While there were some nice Bowman and Topps cards in the package, my favorites are the Chris Sabo Starline cards and the Chef Boyardee Eric Davis. That's the first time I've ever seen those cards. I might have to track down the other 38 Starline cards that make up this set. 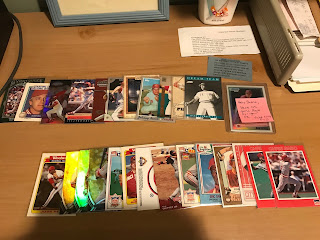 Thank you guys for the cards!
Posted by Reds Card Collector at 9:02 AM 6 comments: