Another year has come and gone with the blink of an eye. As I've done the past few years I decided to once again reflect on how my collection has changed over the past twelve months. Below is a quick recap of my collecting milestones for 2016:
I had hoped to wrap up my man cave and post pictures to the blog this past year, but that was one project where I failed miserably. I'm hopeful however that by this coming spring I'll have it finished and pictures to post. I hope everyone has a Happy New Year and here's to another year of collecting in 2017!
Posted by Reds Card Collector at 9:00 AM 2 comments: 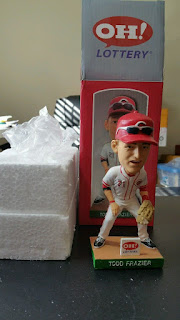 This marks my 39th bobblehead to enter my collection. 30,000 of these nodders were given to fans on July 3, 2013 when the Reds faced the Giants. Cincinnati won the game by a score of 3-2. While Frazier was runner up for the Rookie of the Year award in 2012, he's best remembered by Reds fans for his performance in the 2015 All-Star Game Home Run Derby contest. You can watch the final round of that Home Run Derby below. Sadly, Todd now calls the Windy City home playing for the White Sox.

Posted by Reds Card Collector at 7:23 AM 3 comments: 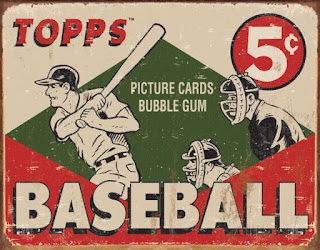 Last week my co-workers were gracious enough to give me a $25 gift card to Amazon for Christmas. Although Amazon is sparse when it comes to card options, there are other items the online retailer offers that I've always wanted but didn't want to spend my card dollars on. This is one of them. It's a modern metal sign that's made to look old. Since I've always been a Topps fan, the sign made logical sense to add to my man cave. There were a variety of Topps signs to choose from but this one depicting the batter, catcher and umpire is by far my favorite.
Posted by Reds Card Collector at 7:37 AM 4 comments: 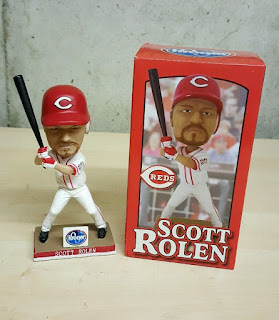 This is the 38th bobblehead to make its way into my collection. A total of 30,000 bobbleheads were distributed to fans on June 12, 2010 when the Reds faced the Royals in interleague play. For those interested, Cincinnati defeated Kansas City by a score of 11-5. I've never seen Rolen as a true Reds player, probably due to the fact that he spent so many seasons with the Phillies and Cardinals. I will admit that his veteran presence in the clubhouse during the 2010 season was a factor in the Reds winning the National League Central division that year.
Posted by Reds Card Collector at 6:14 AM No comments: 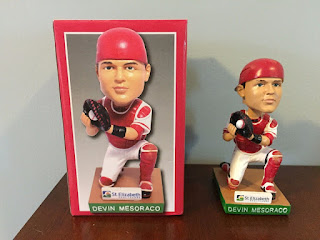 This is the second catcher bobblehead to make it into my collection (the first being Johnny Bench). 25,000 fans received one of these when the Reds hosted the Pirates on August 1, 2015. For those interested, Cincinnati defeated Pittsburgh 4-3. This marks the 37th bobblehead to enter my collection. While I admit that I like the design (much better than the standard batting bobblehead) I wish they would have included the catcher's mask on Mesoraco's helmet. That would have really been icing on the cake. I'm down to needing just three more bobbleheads for my collection, an Eric Davis bobblehead that was sponsored by Dr. Pepper and given out to fans in 2002, a Scott Rolen bobblehead sponsored by Kroger that was distributed on June 12, 2010, and a Todd Frazier bobblehead sponsored by the Ohio Lottery that was given out on July 3, 2013.
Posted by Reds Card Collector at 6:19 AM 2 comments: 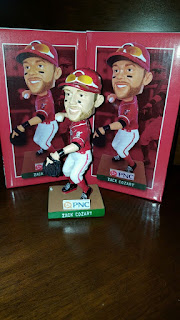 25,000 of these nodders were given out to fans on July 16, 2016 when the Reds hosted the Brewers. For those interested, Cincinnati was pummeled by Milwaukee 9-1. The Reds lone run was an RBI by Adam Duvall. Cozart just wrapped up his sixth season as the Reds shortstop. This is the 36th bobblehead to enter my collection. While not my favorite, I do appreciate that they decided to use a fielding pose instead of a batting pose for Cozart. I'll probably call it quits on the bobbleheads once I hit 40 since I'm starting to run out of room storing them.
Posted by Reds Card Collector at 4:55 AM No comments: