Who Else Stayed Up Late Watching Shop at Home and Don West?

Just curious. I'm just glad I never bought anything from Shop at Home. 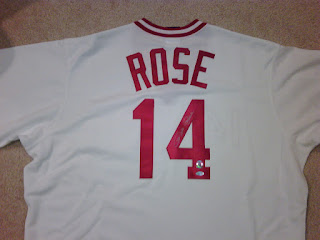 The pinnacle of my Pete Rose collection. I don't have anything to add that hasn't already been said of Pete Rose. He's still my favorite Red and while I don't agree with him betting on baseball (even though he said he bet on the Reds to win during his wagers) I respect his accomplishments on the field. Charlie Hustle had a love and desire for the game you really don't see in today's players. Do I think Pete will ever be admitted to the Hall of Fame....probably not. If Joe Jackson, who put up amazing numbers during the 1919 World Series while allegedly helping to throw the series, still isn't enshrined in Cooperstown then the chance of Rose ending up in the Hall doesn't bode well. Baseball is an imperfect game filled with flawed heroes, and that suits me just fine since I'm not perfect...only human. 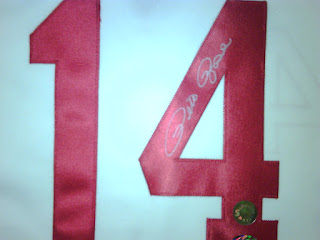 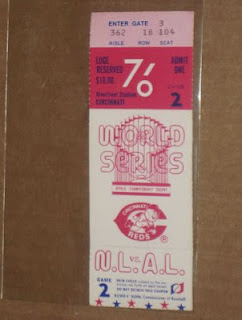 The way I'm going, I don't think I'll complete my 2012 Card Collection goals, but that's ok. I recently picked up this World Series ticket to add to my Cincinnati Reds collection. Cincinnati swept New York in four games during the 1976 series finally bringing an end to all the heartbreaking losses to the Yankees in the 1939 series and 1961 series. I already had a ticket from the 1990 series and the 1975 series so that leaves me with only the 1940 and 1919 series tickets. 1976 was the last year of the Big Red Machine's appearance in the World Series before the machine was slowly dismantled in the late 70s and early 80s. Even though the Reds were able to acquire Tom Seaver, the losses of Rose and Perez as well as the ouster of Sparky lead to a post season drought that lasted fourteen seasons. Although I was born in 1975 and never watched the Big Red Machine play, the legacy of that team adds to the aura of baseball's first professional team and makes me proud to be a Reds fan. Now maybe I can get back to finishing some of my Reds team sets!
Posted by Reds Card Collector at 9:53 AM 1 comment: 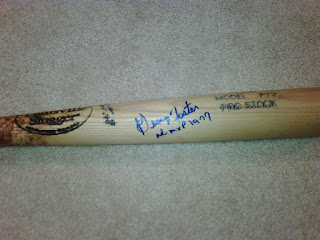 Here's another bat that's a part of my Reds autograph collection. This fine, but broken, specimen (if that's even possible) of a bat is a Louisville Slugger model that Foster autographed with the inscription of his 1977 National League MVP award. Foster was still with Cincinnati at the time and his numbers were very impressive that year. 124 Runs, 52 Home Runs, 149 RBIs and a 1.013 OPS. A five time all-star with the Reds, he was an integral part of Cincinnati's back-to-back World Championships in 1975 and 1976.
Posted by Reds Card Collector at 10:14 AM No comments:

The Grass is Always Greener...When it's FAKE! 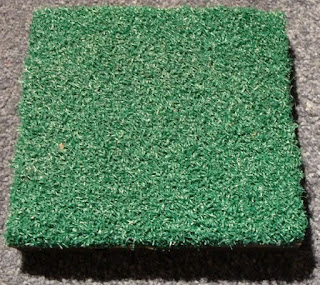 Another relic I have from Riverfront Stadium (aka Cinergy Field) is this 9 inch by 9 inch piece of AstroTurf that was used prior to it's removal and installation of grass just before Cinergy Field's demolition after the 2002 season. This is a nice oddball piece in my collection, and while I wish I would have been able to snag a piece with the foul line on it, I guess beggars can't be choosers. I am hoping to eventually get some game used dirt from both Riverfront and Great American Ballpark, which I think would complement this turf nicely. I don't suppose anyone would know where I could get a brick from Crosley Field or an usher's uniform used at Crosley?
Posted by Reds Card Collector at 11:46 AM No comments: 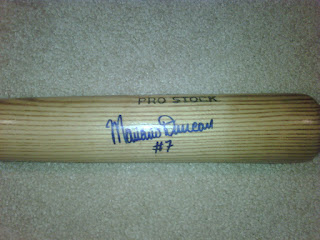 Here's another autographed Louisville Slugger bat that's part of my Reds collection. Mariano Duncan was a member of the 1990 Reds World Championship team. He was traded in 1989 by the Dodgers, along with Tim Leary, for Kal Daniels and Lenny Harris. While he was never an All-Star during his two years in Cincinnati, his contributions in the field and batting helped the Reds to their first Wire-to-Wire World Series Championship. The bat itself has been cracked and repaired, but the autograph is in pristine condition. A nice piece from a great second baseman for the Reds.
Posted by Reds Card Collector at 8:36 PM No comments: 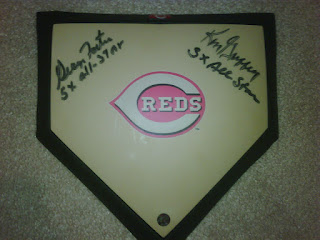 One of my favorite items I have in my Reds collection is this mini home plate autographed by George Foster and Ken Griffey. I wanted to try and get the starting eight of the Big Red Machine autograph this piece as well as Sparky Anderson, but with Sparky's passing, that's no longer possible.  Regardless, I'm still hoping to still get some of the members of the Machine sign the plate.  Foster was the 1977 National League MVP and a five time all-star for the Reds. As for Griffey, he was a three time all-star for the Reds. There's only one issue I have and that's displaying this mini-home plate with the rest of my collection. I'll probably build a custom display case for it since I don't feel like spending $40 on a case when I could put that $40 towards baseball cards.
Posted by Reds Card Collector at 6:16 PM 1 comment:

I'm still working on getting some cool things for my Man Cave (aka my Cincinnati Reds Fan Appreciation Room) While I do have a lot of items that I think are great to have, such as my autographed memorabilia, bobbleheads, and world series tickets, there are still a lot of things I haven't even scratched the surface on. Game used equipment, usher uniforms, maybe a brick from Crosley field (if I can ever find one) would be some cool things to have. While I was surfing the web today I came across a great site that had some photos of other "Fan Appreciation Rooms". The one thing that crosses my mind when I look at some of these rooms is "Where do these people get their money?"  Check out the rooms here at KeyMan Collectibles.
Posted by Reds Card Collector at 9:43 AM No comments: Here's another outstanding book that's part of my growing library of baseball literature. Anything and everything you wanted to know about today's current parks, with the exception of the new Yankee Stadium, Busch Stadium, Citizens Bank Park, PETCO Park, Citi Field, Nationals Park, Target Field and Marlins Park (anything 2004 and younger). I love the panoramic shots that are in this book. I would probably take some out and frame if it didn't destroy the book itself. One of the greatest things Ballparks has going for it is the fact that it doesn't gloss over some of the well known ballparks that are long gone. Ebbets Field, Shibe, Crosley...they're all found in here. I also appreciate the fact that each team is broken down by division as compared to alphabetical. There's a ton of information in this book and it's definitely not something that can be read in a day. But I will say that I've read through this book more than once and I have learned something new each time I've flipped through it's pages. It also makes me appreciate the stadiums of today and yesterday a little bit more if not for their quirky designs, then for the history that took place on those hallowed grounds from summers long ago.
Posted by Reds Card Collector at 9:04 AM No comments: 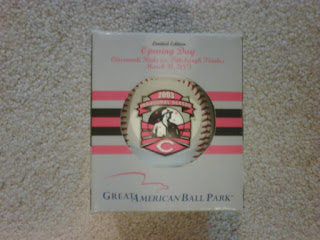 It's always a day of celebration when a new ballpark opens in this great nation of our (unless you live in Miami where the owners believe in screwing the hard working citizens of the city to make a buck while providing the fans with a team that's sub par). Cookie cutter stadiums from the 70s and 80s have given way to retro stadiums reminiscent of the golden era of baseball. The massive and overwhelming concrete bowls of Riverfront, Three Rivers, Veterans and Busch were soon replace by intimate ballparks such as Camden Yards, Jacobs Field, Coors Field and Arlington. When the Reds left Riverfront at the end of 2002 (then known as Cinergy Field) to move into Great American Ballpark, it was a expected to be a new day, a new beginning for a team that had fallen on tough times and was no longer an annual contender in the post season. While that hasn't necessarily panned out, it has brought back the feel of classic baseball along the riverfront in the Queen City.

Great American Ballpark hosted it's first Reds game on March 31, 2003. On a day that was to celebrate a new beginning for baseball for Cincinnati, it was a complete disaster as the Reds lost to Pirates 10-1. The Reds lone run in the game came about in the bottom of the third when Jimmy Haynes was walked in. Anyway, to celebrate the momentous occasion, the Reds handed out these souvenir balls to the fans in attendance. While not the greatest of stadium giveaways, it is a nice change of scenery from the bobbleheads that have been commonplace within the recent decade. Definitely a keeper for my collection.
Posted by Reds Card Collector at 9:14 AM No comments: