I realize that Topps released their 2019 flagship series one cards a few days ago, so I'm a little late to the party. I do like the design of this year's set. Although there aren't any borders, the hockey stick style that's reminiscent of the 1982 design comes close to providing one. I just wish Topps hadn't included the pixel effect on the cards. There are a few Reds base cards that immediately grabbed my attention in this year's series one release. The first being Billy Hamilton with the ivy at Wrigley. 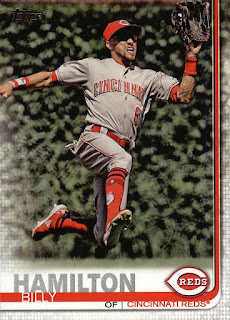 I'm still disappointed that Hamilton is no longer with the Reds. Defensively, he's a beast and has some of the greatest catches I've ever seen a center fielder make. Offensively, he just doesn't have the bat to at least get on base. Maybe he'll be able to pull it together in Kansas City. The second card I admire is Joey Votto stretching before his at bat. For whatever reason, this card reminds me of all the Leaf Pete Rose cards that show Charlie Hustle doing the exact same thing. 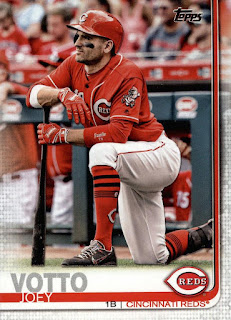 Finally, this Votto short print is fantastic. It's something you don't see very often from Topps in a base flagship set. Every time I look at this card I hear the same phrase repeated over and over in my head, "Damn he's smooth." 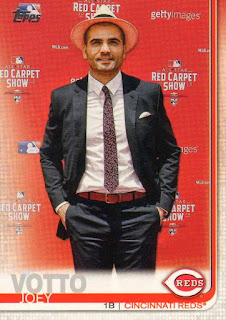 So, that's my thoughts about 2019 Topps series one. I'm already looking forward to series two as long as there are no super short prints I have to chase.

Posted by Reds Card Collector at 7:44 AM 2 comments: