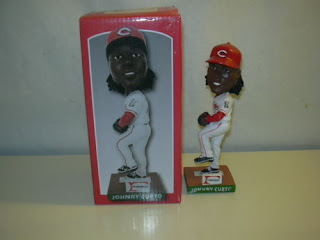 It's never easy seeing your former ace play for another team. It was tough last year seeing Cueto go to Kansas City but at least he was able to get a ring for the few months he was there. When he joined the ranks of the American League it was a little easier to digest. However, now that he's wearing orange and black it's just too much to bear. I guess it could be worse. Better that he's a Giant instead of a Cardinal or Cub. Anyway, just a bit of history on this bobblehead I picked up this past week. There were 25,000 of these given away on August 4, 2012 when the Reds were facing the Pirates. Cincinnati won the game 5-4 with Aroldis Chapman getting the save. I still need to grab a Chapman bobblehead and the prices have come down a bit on his now that he's a Yankee. I'm glad things didn't pan out for Chapman going to the Dodgers. Seeing Cueto and Chapman on the west coast in the National League would have been too much for me to handle psychologically.

Posted by Reds Card Collector at 7:36 AM No comments: