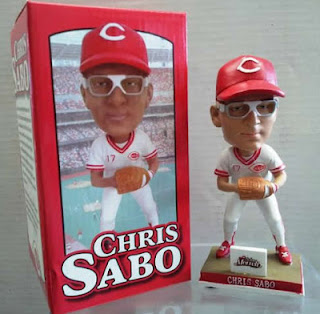 My latest pickup this week is another bobblehead to add to my ever expanding Reds bobblehead collection. Spuds was a member of the 1990 World Champion Reds team and also the 1988 National League Rookie of the Year. A three time All-Star, Sabo was elected to the Reds Hall of Fame on July 17, 2010. This bobblehead was given out to fans in attendance of Reds/Rockies game that evening. Reds fans were treated to an 8-1 victory in addition to taking home this awesome nodder! Unfortunately, if I keep buying bobbleheads or world series tickets, I won't be able to complete the Reds team sets on my 2012 card collecting goals. Guess I need to get back on track soon.
Posted by Reds Card Collector at 9:24 AM 1 comment:

There's nothing worse than forgetting an anniversary, or a birthday for that matter. Not only does it shout out "Hey, I guess the date wasn't important since I FORGOT" but it's just a total lack of disrespect. So it comes as no surprise that I forgot my anniversary...my blog anniversary. I guess I can use the excuse that I was on vacation last week for my utter lack of respect. Regardless, I'll make sure it doesn't happen again next year. So please forgive me for forgetting my June 22 anniversary and I want to wish myself a happy 1 year anniversary here at the Reds Card Collector!!!
Posted by Reds Card Collector at 8:51 AM No comments:

I'm back from vacation and decided to post my latest pickup. I was able to add this 1990 World Series ticket stub to my memorabilia collection. I still think it's amazing that the Reds went wire-to-wire in 1990 AND swept the Oakland Athletics in the World Series! I won't deny the fact that I was a HUGE Canseco and McGwire fan at the time and was sporting an As hat that year (momentary lapse of sanity). But I was happy that Cincinnati was crowned World Champs that year since Cincinnati needed something special after going through the whole Pete Rose debacle. A Red October....how sweet it was.
Posted by Reds Card Collector at 10:16 AM No comments:

There's a Contest Going On!

Matt at Number 5 Type Collection is having a contest! Head on over and check it out! http://number5typecollection.blogspot.com/2012/06/fourth-anniversary-hof-giveaway.html
Posted by Reds Card Collector at 6:29 AM 1 comment:

A Ticket to One of the Greatest World Series Ever Played 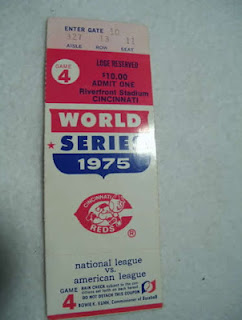 Here's the latest addition to my ever expanding Reds collection. This weekend I received this ticket in the mail to Game 4 of the 1975 World Series. I know it's not a ticket stub from Game 6 of the series, but I wanted to get a stub that had the Reds logo and since I was able to grab this for the price of a blaster, I couldn't refuse. There's no fading, and most importantly, no creases whatsoever to the ticket. Even though this might set me back on completing some of my card collecting goals for the year, I knew I had to get this cool piece of history. Now if I can only find a ticket stub to the 1990 World Series for the same price.
Posted by Reds Card Collector at 9:32 AM No comments: 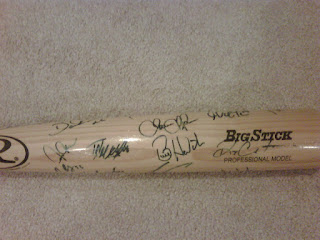 Not many things are as cool to me as an autographed team baseball....but an autographed team bat is the next best thing. I picked up this Rawlings Big Stick autographed bat a few years ago for a little more than the price of a couple of blasters. Although the bat wasn't signed by Griffey and Dun, it does have some of my favorite past and present players such as: Aaron Harang, David Weathers, Bronson Arroyo, Brandon Phillips, Jason LaRue, Tom Hume, Billy Hatcher, and Jerry Narron. Although the Reds weren't a great team in 2006, for me this is a cool thing to have in my collection. 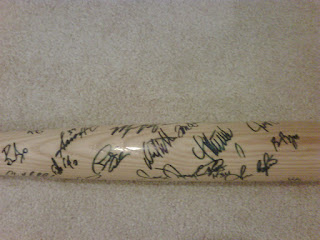 Posted by Reds Card Collector at 10:06 AM No comments: 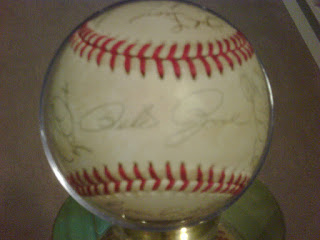 I love autographed team balls. There's just a sense of aura that surrounds them. Maybe it's because I feel like I have a piece of history that's tied to a team at a particular moment of time. Or maybe it's the beauty of having multiple signatures gracing a ball that's been passed from teammate to teammate as they scribe their John Hancock. I've made it a goal to have some autographed Reds team balls in my collection and I'm very content with what I have thus far. One of my favorite team balls is 1985. This was the year that Pete Rose rejoined the Reds as player/manager (something you don't see anymore, but I wouldn't mind if it were to happen again). This was the year that Rose passed Ty Cobb claiming the mantle of "Hit King". Some other prominent signatures on the ball include the following Reds greats: Tony Perez, Tom Browning, Eric Davis, Dave Parker, John Franco, Ron Oester and Mario Soto. I've included some additional pics below. Sorry if they're a little blurry, that's the best I could do with the phone on my camera. 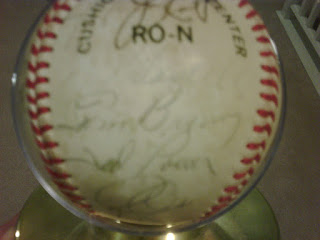 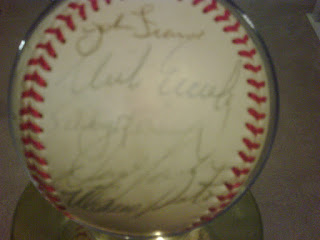 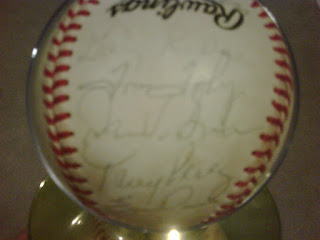 A Reds Fan Who Puts My Collection to Shame 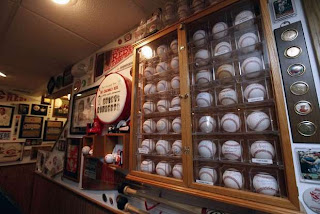 Bill Shephard is someone you would call a true diehard Reds fan. Don't believe me? Well then just take a look at his basement in Harrison. Talk about a collection! Bill has everything and anything you can imagine a Reds fan having in their man cave. From autographed baseballs, pictures, bobbleheads and pennants, Bill has as amazing assortment of Reds memorabilia. While I will probably never be able to amass a collection comparable to Bill, it's nice to know that there are other Reds fans out there that enjoy baseball's first professional team as much as I do. You can see additional photos of his collection at http://news.cincinnati.com/apps/pbcs.dll/gallery?Avis=AB&Dato=20101007&Kategori=LIFE08&Lopenr=10070801&Ref=PH
Posted by Reds Card Collector at 7:54 AM No comments: 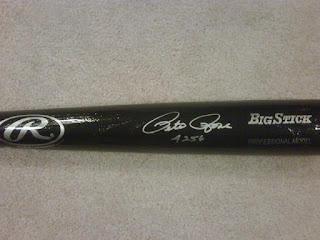 I'm a huge Pete fan. In fact, he's my favorite Reds player of all time! Although he made some bad decisions, I can't overlook the fact that what he accomplished on the field should not overshadow what he did off the field. In addition to having all the Topps issued Reds Pete Rose cards (1963-1979, 1985-1989), I've collected some items signed by the "Hit King" himself. I've already shown an official National League baseball I have autographed by him, so today I'm showing off a Rawlings Big Stick bat he's signed. I've had this bat for more than five years now and it's one of the nicest autographed items I have in my collection. While I normally prefer Louisville Slugger bats, the black Rawlings bat with a silver signature makes for a nice piece.
Posted by Reds Card Collector at 9:42 AM 1 comment: 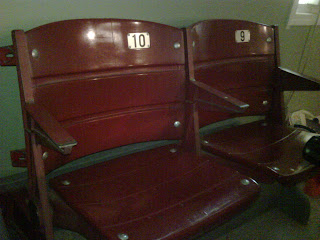 A while back I posted about some seats available from Crosley Field on eBay (and how I would like to eventually purchase one for my Reds Man Cave). I finally decided to follow that post by sharing with all of you a pic of my Riverfront Stadium/Cinergy Field seats my wife and I received as a Christmas gift back in 2002 from my Mother-In-Law. These are probably one of the coolest gifts I've ever received. I love the fact that one of the seats is #10 the same number as the uniform number of the greatest manager the Reds ever had....Sparky Anderson! These seats are fantastic. The arm rests are a little weathered with some loss of paint, but that's to be expected after being left in the elements for more than thirty years. It's also amazing to think of the history these seats were witness to from the rise of the Big Red Machine, Pete Rose's 4192 hit to surpass Ty Cobb as the Hit King, and the 1990 Reds Wire-to-Wire Championship season. A very cool piece of history that I'm glad to have in my collection.
Posted by Reds Card Collector at 9:52 AM 3 comments:

Do Stadium Giveaways Take Away from the Ballgame?

Who doesn't like to get free stuff? Whether it's free food, a free ticket to a game, free baseball cards...I could go on. Every year I make it a point to go on a pilgrimage to Cincinnati to catch a Reds game. On occasion I'll buy a ticket to a particular game when I know that they're giving away a bobblehead of someone I don't yet have in my collection. I love my bobbleheads as they sit there on the bookcase in my yet unfinished Reds Man Cave, but I have begun to wonder...is it really worth it for the game to have all of these promotions? It seems like we've become a society in which we're always asking "What's in it for me?" Have we reached a point where we refuse to spend an evening at the ballpark rooting for our team because they weren't giving something out at the game? Better yet, why do most stadiums have a cheer team that come out every few innings to shoot a cheap two dollar t-shirt into the stands so that we can hit, kick, or shove other people out of the way for a measly piece of cotton? Maybe someone pissed in my Wheaties this morning but, in my own humble opinion, if you need to get something to venture out to the ballpark you're not a fan of the game. In fact, your time would be better spent scrounging supermarkets for free samples. Then again, that's just my humble opinion.
Posted by Reds Card Collector at 10:55 AM 2 comments:

Great Googley Moogley! It's like having my own Card Shop is having a contest with some sweet prizes. Go check it out here http://betterthanbeckett.blogspot.com/
Posted by Reds Card Collector at 5:50 AM No comments: