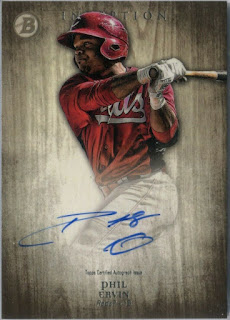 I picked up this Phil Ervin autograph today on COMC for $1.75. I'll gladly pay that for someone who was with the Reds organization for three seasons. Did you know that Phil Ervin made his first career start at Wrigley Field on August 17, 2017 and went 3-4 with a home run and 4 RBIs?
Posted by Reds Card Collector at 9:31 AM No comments: 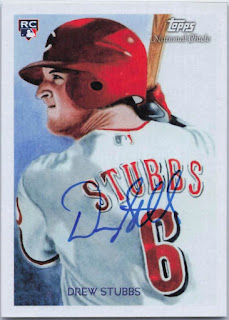 I recently picked up this Topps National Chicle Drew Stubbs autograph to add to my Reds autograph binder. Did you know that Drew Stubbs hit a game-winning triple for Team USA in the gold medal game against Japan at the 2004 FISU II World University Baseball Championship. He also had 110 stolen bases for his four seasons with the Reds.
Posted by Reds Card Collector at 5:56 AM No comments: 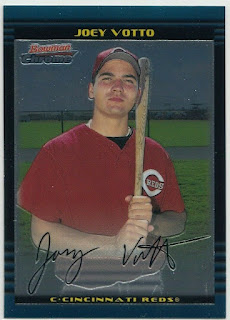 With the end of the baseball season here, it's also more than likely the end of pitchers batting in the National League. I'm a purest when it comes to the game. I feel that if a pitcher wants to throw at a batter then his time will come when he's standing in the box and just as likely to get beaned. I'm not a fan of the designated hitter but I guess a lot of fans want more offense in the game. Personally I don't. I would prefer watching a pitcher's dual any day of the week as compared to teams going yard all the time. It's just not the same. Regardless, time marches on and the game changes. Speaking of changing the rules, my Votto Rookie project is getting closer to completion thanks to me changing my rules for the binder. I decided to add three 2002 Bowman Votto cards to my binder because they're "technically" Votto's rookie cards according to Beckett and the way rookie cards were labeled as such under the old school way of doing things. If you're interested in what they say about that you can read the article here. I added the 2002 Bowman Draft Picks and Prospects standard card, the 2002 Bowman Draft Picks and Prospects Gold foil card and the 2002 Bowman Draft Picks and Prospects Chrome card to my album. With these additions I'm down to needing just five more cards to wrap up this project. Unfortunately 4 of the 5 cards I'm chasing are autograph cards.
Posted by Reds Card Collector at 11:16 AM 7 comments:

By The Letter Encarnacion 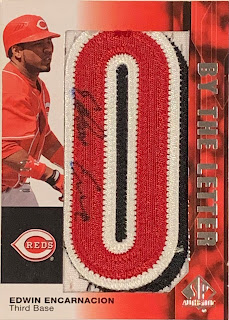 A few weeks back I picked up this 2008 SP Authentic By the Letter autograph of Edwin Encarnacion. Numbered 1/99, I thought it would make a great addition to my Reds autograph album. I hadn't realized that Encarnacion didn't play the 2021 season and that he spent last year with the White Sox. I'm glad to add this former Red autograph to my collection.
Posted by Reds Card Collector at 6:05 AM No comments: 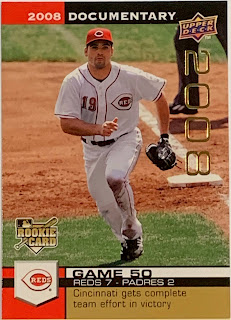 Last week I was able to track down two more cards I needed for my Votto Rookie Album project. Those two cards are the 2008 Upper Deck Documentary standard issue and gold parallel. There are 10 each of the 2008 Upper Deck Documentary cards in each version that depict Votto on the front of the card for a total of 20 cards but I only wanted one copy of each. I also wanted the card to be the same card number AND mention Votto in the short write-up on the back of the card. Luckily I was able to identify a card in the set to chase and it was icing on the cake that the Reds also won the game the card mentions. Now I just need 9 more cards to finish up this project.
Posted by Reds Card Collector at 5:51 AM No comments: 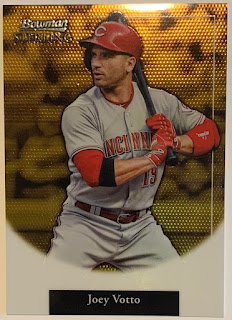 That's what I've been chasing lately. I'm currently at 76 unique Votto rookie cards and the ones that are missing from my collection either haven't been seen in months, sometimes years, or they're so overpriced on eBay that I'm not even going to attempt to make an offer. Hopefully I can snag some more unicorns before the end of the year but prices for Votto rookies have skyrocketed ever since he passed the 300 home run mark earlier this season. As for rainbows, I've been working on putting together a fun little collection of Votto refractors for my collection. I'm looking at trying to acquire 90 different Votto numbered parallels. So far the majority of my refractors are of the gold variety so I guess you could say there is a pot of gold at the end of this rainbow. I do have an orange, a green and a couple of blues. If your interested in seeing what cards I've acquired you can hit the Votto Parallel Universe Project link in the navigation.
Posted by Reds Card Collector at 7:29 AM 4 comments:

End of an Era

I found out today that Topps will no longer have an MLB license at the end of the 2025 season. While some collectors might be happy about this news, I think I'm on the other side of the fence on this one. I haven't been much of a fan of Topps flagship products the past few years but I've always collected the Reds sets with due diligence. It's just something I've done since I started collecting in 1986 and pursued once more after my hiatus from the hobby from 1995 to 2001. This is the end of an era for Topps and I wonder if it's the final nail in the coffin for the company in general. I'm also wondering how this is going to play out for our hobby in general. With Fanatics being the sole proprietor of MLB cards and the fact that they have no experience in the production of trading cards could this be the beginning of the end for our hobby as it relates to future cards? I guess only time will tell. Maybe I'll stop purchasing product at the end of the 2025 season if I don't like where things are going with this new direction. After all, it all comes down to money and I feel that the only reason Fanatics threw their hat in the ring is to cash in on the hype that's engulfed our hobby once more. If they decide to cater strictly to the high tier enthusiasts of our hobby and not create a great product at an affordable price, then I'm out. I'll be content with tracking down vintage product. If you're interest in reading the article that's posted on ESPN, here's the link:https://www.espn.com/mlb/story/_/id/32052284/fanatics-strikes-deal-become-exclusive-licensee-mlb-cards

Posted by Reds Card Collector at 5:15 AM 2 comments:

And Then There Were Two 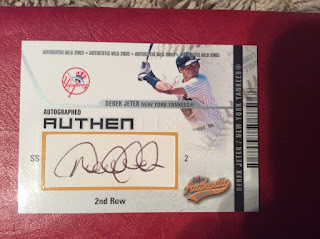 For the past 18 years I've been working on completing a set that has been a thorn in my side. The company is no longer around and it's taken me what seems like forever just to pick up a card that I need. That changed this past weekend when I acquired not one but two of the four cards I needed to complete the 2003 Fleer Authentix set. Comc.com had a listing for a Bobby Doerr card that I had only seen once (as in only once in the 18 years I've been working on this set). I couldn't buy that card fast enough. It was less than $2 and the last time I ever saw the card listed years ago the seller was asking for $20. In addition to picking up the Doerr, I decided to bite the bullet and get the last autograph I needed from the set. This Jeter completes the trifecta of autographs that Fleer put out in this set back in 2003. I already had the Barry Bonds and Nolan Ryan so adding this card was a nice addition even though the price was steep. As I said, with those two cards acquired I'm down to only needing two more cards: Chin-Feng Chen in the base set update and a Hometown Heroes Johnny Damon.
Posted by Reds Card Collector at 11:31 AM 4 comments:

Forgetting the First Rule of Collecting 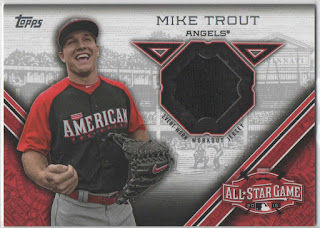 Collect what you enjoy. So many times I think we have a tendency of forgetting that when it comes to this hobby. I know I have and I've regretted it. Case in point, over the past year I've purged my collection of three projects that I decided either didn't fit into my collection or that I just wanted to fund purchasing something else. Those three projects were the 2015 Topps Update All Star Stitch set, the 2015 Topps Strata Shadowbox set and the 2008 Votto Rookie collection. The first two weren't a big deal, but getting rid of my Votto rookies....what was I thinking?! Once those cards left my collection I knew I had made a huge mistake. I decided a few weeks back that I would decide to pursue not only 90 different Votto cards once more, but also the All Star Stitch and Shadowbox set as well. I really like the design of those cards and I need to remember that when it comes to collecting I should acquire cards that I like. Also, I need to remember that when it comes to collecting, this is a marathon and not a sprint. The greatest joy I get in this hobby is when I complete a project that has taken years to reach the finish line. I've added links to the pages I've created for these projects and I know that these projects will keep me busy in the years to come.

Posted by Reds Card Collector at 7:16 AM 4 comments:

Getting a Mask for the Man Cave 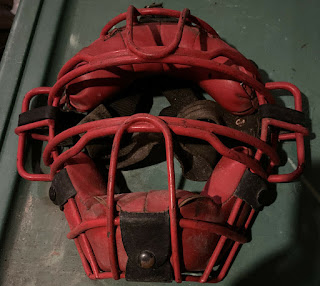 With COVID still raging around the country, I'm hopeful that things will get back to "normal" later this year. I'm scheduled to get my second vaccination this Wednesday and by the beginning of May our household will be completely vaccinated. I've been wanting to purchase a mask for my man cave for quite some time but never got around to it. That changed last week when I found this listed on eBay. Granted it's no N95, but I think it's a fantastic addition and it's red! Now I just need to find a place to put it. I'm thinking about placing it with the various baseball gloves I've acquired but not sure yet. On the card front, I've been working on a couple of projects and I'll probably post an update soon about what I've been doing but for now make sure you keep wearing a mask in public. 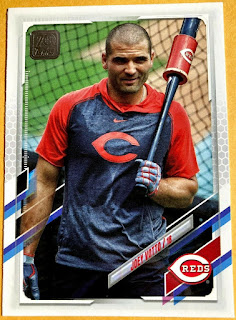 The cards are on their way. Each year I head over to eBay and pick up a Reds team set because I don't feel like spending money busting packs trying to build a single team set. That's just too expensive and I end up with a ton of cards and inserts I don't want. Besides, there are a lot of projects I'm working on and I would rather the majority of my funds go towards acquiring cards to complete those projects instead. Luckily for me, Topps only included one short print in series one that I needed for my set, the Joey Votto card pictured in the post. That too is on it's way to my house and hopefully will be in my binder before the end of the week. I'm glad that Topps decided to include a border in this year's design. To me, the base set should have a border. Save the full bleed photos for Stadium Club. I just don't care for all the transparent boxes on the front of the card. Still feels a little too much like Bowman for me. That and the fact that there are so many rookie cards in Series 1. Maybe if the name was a little larger I would be more of a fan of the design.