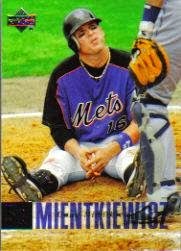 I still can't believe that in less than two months I will have been blogging for four years. Who would have thought it would have lasted that long. I'll admit, I'm not a great writer. In fact I'm not a writer period. However, I have enjoyed sharing my collection of Reds cards and memorabilia with all of you during these past four years. Will I be blogging four years from now? Probably not. Eventually I will have shared all that I have with my fellow collectors and, like my favorite Star Trek series finale, all good things must come to an end. I'm not sure when that may happen, but I'll know when the time comes. For now, here's another entry into my album of amazing project, a 2006 Upper Deck Doug Mientkiewioz. I'm grateful I don't have a last name like that. Must have been brutal for him as a kid trying to spell that.
Posted by Reds Card Collector at 9:52 AM No comments:

A Couple of Cracked Bats

I picked up a few more cards for my album of amazing a few weeks back that featured a couple of cracked bats. The 1983 Fleer Duane Kuiper in a nice posed photo with Duane holding the barrel of the bat while the handle swings precarious over his shoulder. The second is a 1992 Studio Randy Johnson with the Big Unit staring menacingly at the photographer with three destroyed pieces of lumber in his hands. I think it would be great if Topps released a card showing the exploding bird from Johnson's pitch on March 24, 2001. That would make for an amazing card! 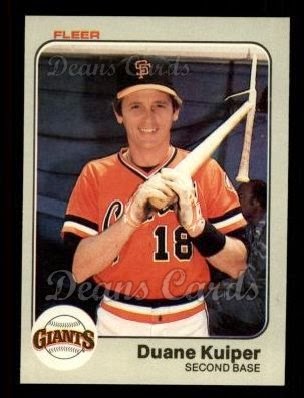 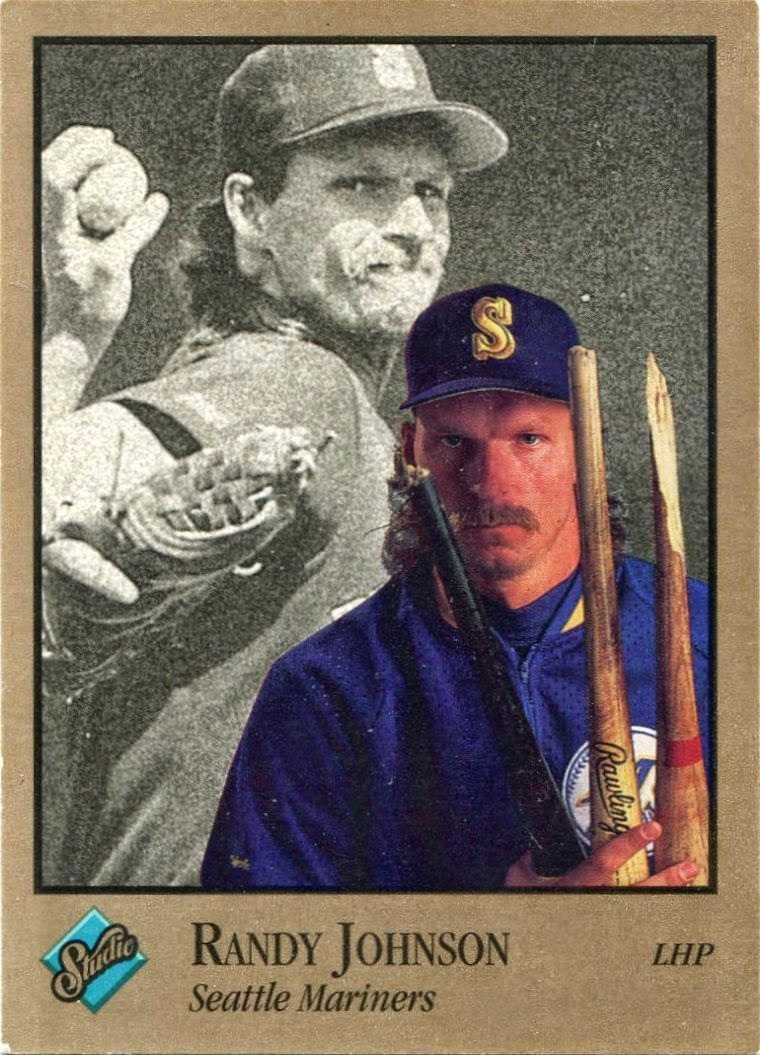 Posted by Reds Card Collector at 10:11 AM No comments: 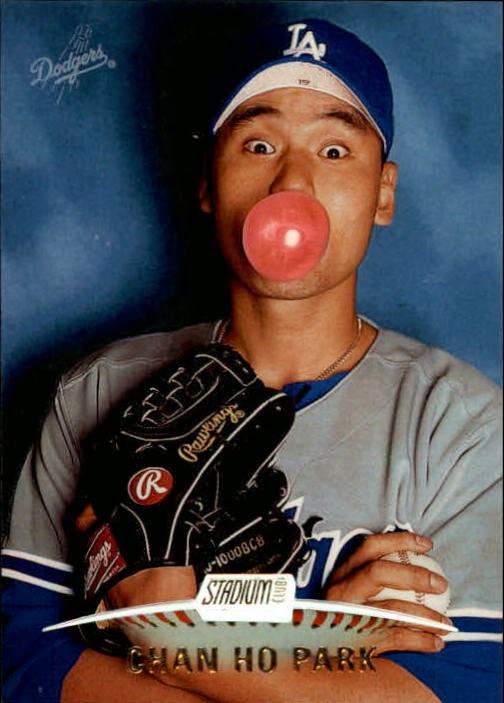 The first time I laid eyes on the package I knew in my adolescent heart that I had to try it. Shredded bubble gum in a pouch that looked identical to those used for chewing tobacco with a hulking ballplayer that had arms the size of tree trunks staring down a pitcher...that's what bubble gum should look like for kids that loved baseball. As the years have passed I see less and less of Big League Chew in the grocery stores and it's impossible for me to find bubble gum cigars, candy cigarettes and other types of candy from my youth that are politically incorrect today. I'm still a bubble gum fan and it still pains me every time I open a pack of Topps flagship that there isn't that pink sugary strip waiting for me to pop in my mouth and chip a tooth. Since I've always connected baseball cards and bubble gum together dating back to the first time I opened a pack of Topps back in 1986, I had to add a card to my album of amazing showing a player with gum. This 1999 Stadium Club Chan Ho Park fills that need nicely.
Posted by Reds Card Collector at 10:27 AM No comments: 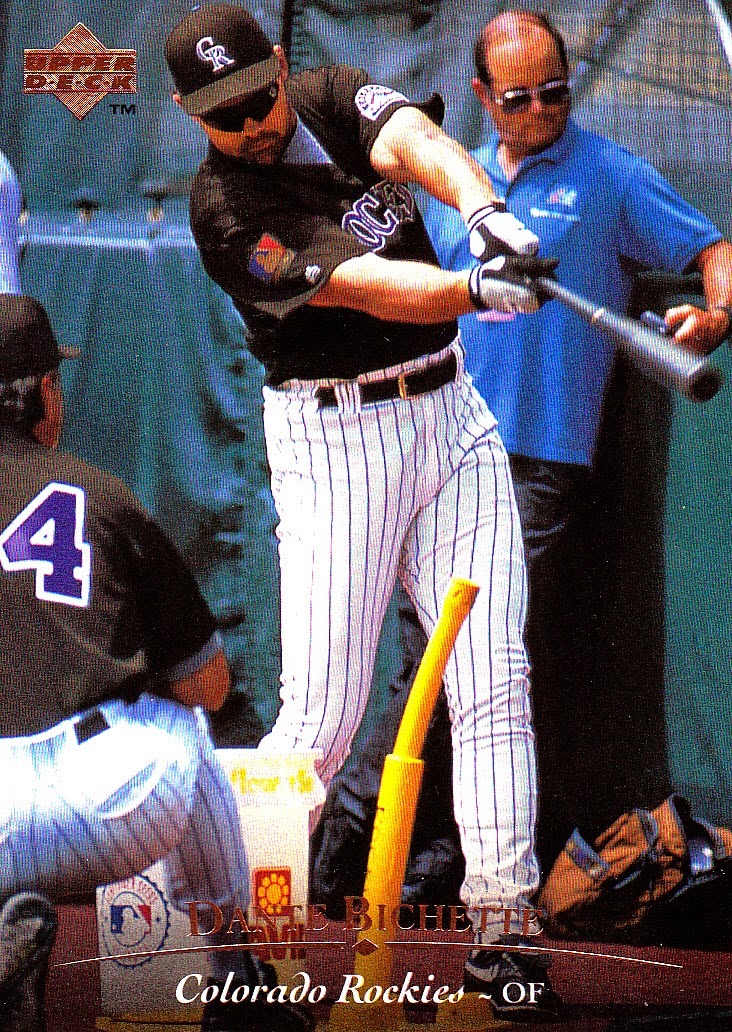 I think this is my first card showcasing a batting tee in the photo. I still have fond memories, although they're quickly fading with age, when Dante Bichette was a Red. This 1995 Upper Deck card is another great addition to add to my album of amazing.
Posted by Reds Card Collector at 8:59 AM No comments: 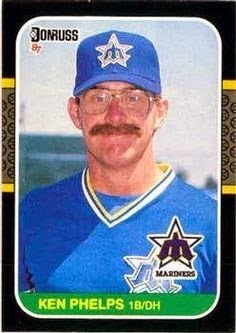 That's the word that comes to mind when I look at this 1987 Donruss Ken Phelps. I'm happy to add this card to my album of amazing!

Posted by Reds Card Collector at 12:09 PM No comments: 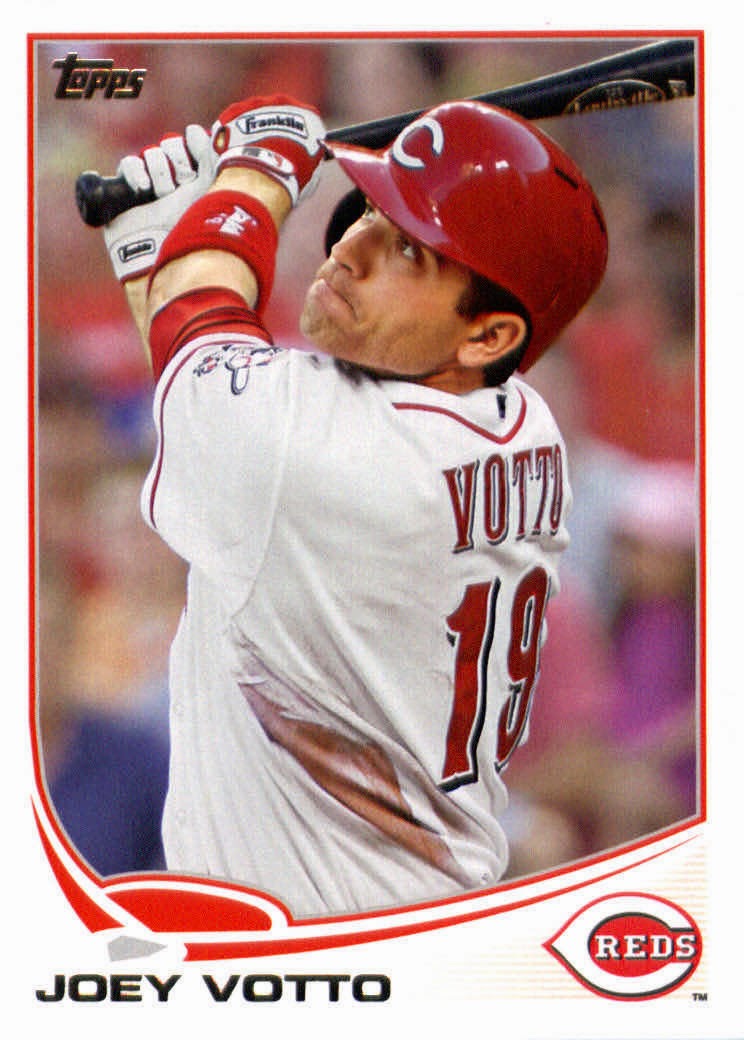 Last week I made another purchase for my 2013 Topps Votto rainbow project and the card finally arrived in my mailbox yesterday. It's not as flashy as my previous pickups. In fact, you could say that it's a little dull. Regardless, it was still a card I needed and it's one less card to chase. This is the 29th card in my Votto rainbow project and while it appears to be your standard 2013 Topps base card, it's not. This is the 2013 Topps Cincinnati Reds Team Set Votto card that was distributed with the Factory Teams sets that Topps distributed. The only difference with this card and the standard base card is the numbering on the back. This Votto is numbered CIN-1 as compared to 19. With this addition, I'm seven short of completing the rainbow. Those magnificent seven are: a 2013 Topps Factory Orange Votto /230, a 2013 Topps Silver Slate parallel /10, a 2013 Topps Opening Day Toys R Us parallel, a 2013 Topps Chrome Camo /15, a 2013 Topps Chrome Atomic /10, a 2013 Topps Chrome Pink /5, and a 2013 Topps Mini Black /5. I have a feeling it's going to take some time to find them.
Posted by Reds Card Collector at 7:45 AM No comments:

Who Knew Golf and Baseball Went So Well Together! 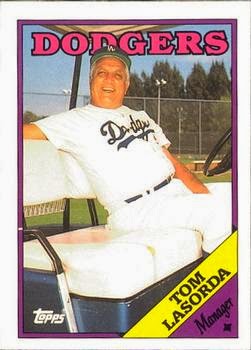 I like golf. I like to play it whenever I get the opportunity to do so. On average I normally play 18 holes once or twice a year. I never said that I play golf on a regular basis because I just don't have the time to do it. Am I great, no...am I terrible, probably. But that's ok with me because as long as I'm enjoying myself that's all that matters. In my quest to complete my album of amazing project this year, I knew if there was a baseball card out there that depicted golf in some way, shape, or form that I needed to acquire it. So here's the latest addition to the album, a 1988 Topps Tommy Lasorda. I've always liked Tommy and seeing him in this photo of him relaxing in a golf cart is classic. I'm very surprised at some of the photography gems that are part of the junk wax era of the hobby.
Posted by Reds Card Collector at 11:00 AM No comments: 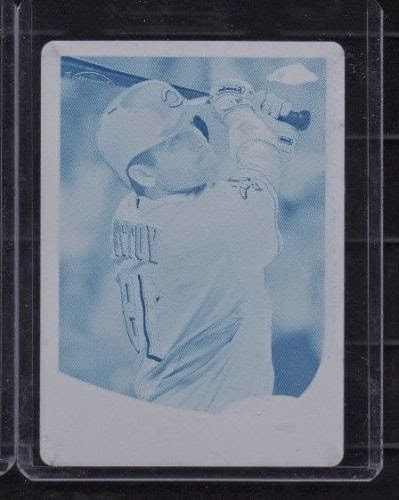 Last week I was able to add another card to my Votto rainbow. While technically not a card, this cyan printing plate was still used in the production of the 2013 Topps Votto chrome cards and so I couldn't pass up the opportunity to acquire it. I had to pay a little more than I was expecting since I had to win the auction on eBay. With this printing plate now part of my collection, I'm just 8 cards short of completing this project.
Posted by Reds Card Collector at 7:26 AM 6 comments:

Pain in the glavin! 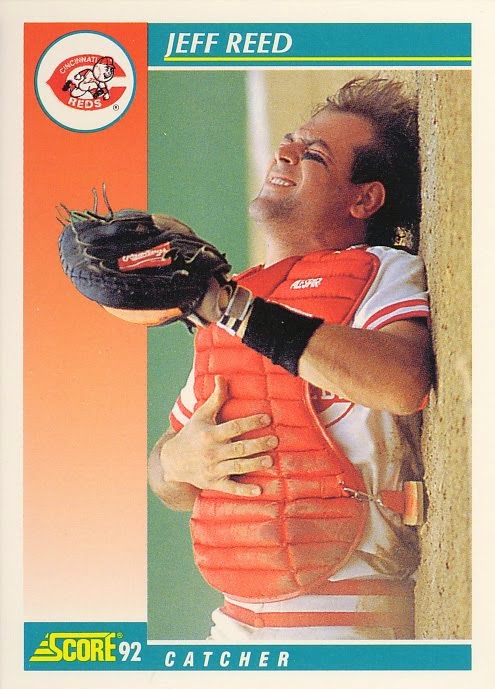 I try not to include Reds cards in my album of amazing project since I'm content with the Reds cards I have and this project is strictly for branching out into other realms of the hobby that I haven't explored. However, when I saw this 1992 Score Jeff Reed I had to make an exception. Granted it's never funny when a player gets hurt in the game but it isn't everyday that you see someone grimace on a ball card. I think the only way this card could be better is if Score had not rotated the image and zoomed back just a little to give us a complete view of the play at the plate.
Posted by Reds Card Collector at 9:37 AM 2 comments:

Who's the cat in the hat? 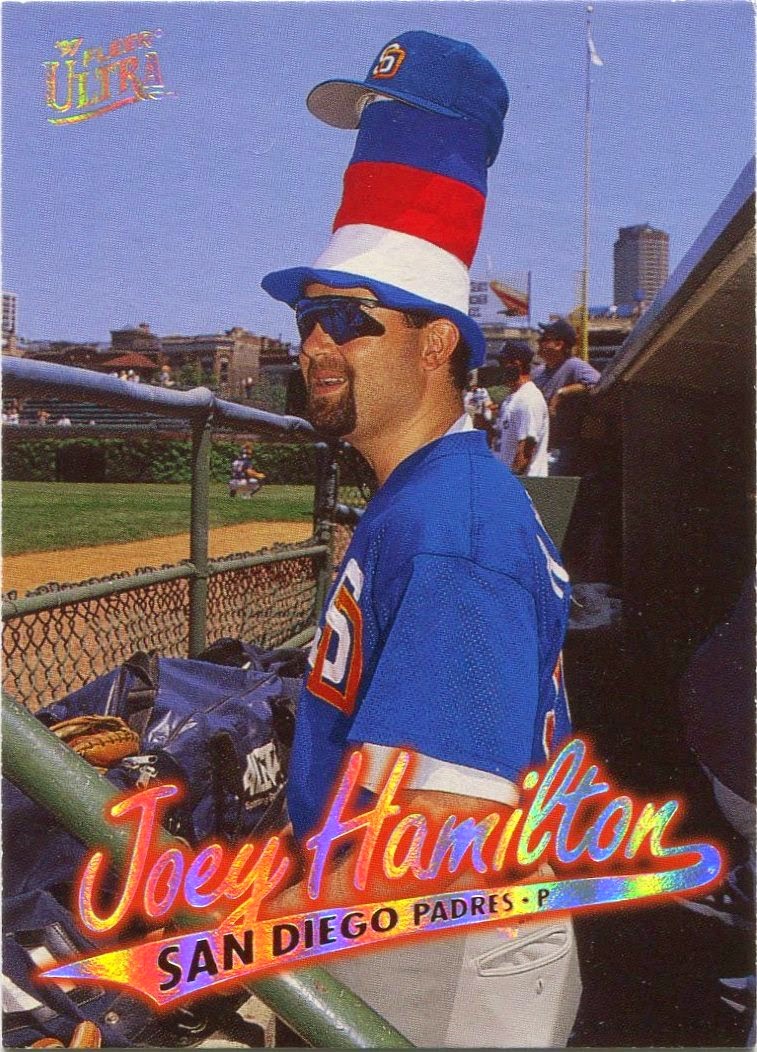 Joey Hamilton, that's who. Here's my latest addition to my album of amazing project a 1997 Fleer Ultra Joey Hamilton. I like the whimsy of this card and knew that when I saw it I had to add it to the album. I think this is the first time I've ever used the term "whimsy" in a post. Regardless, it's a very nice card and I'm glad I now own it.
Posted by Reds Card Collector at 5:12 AM 4 comments: 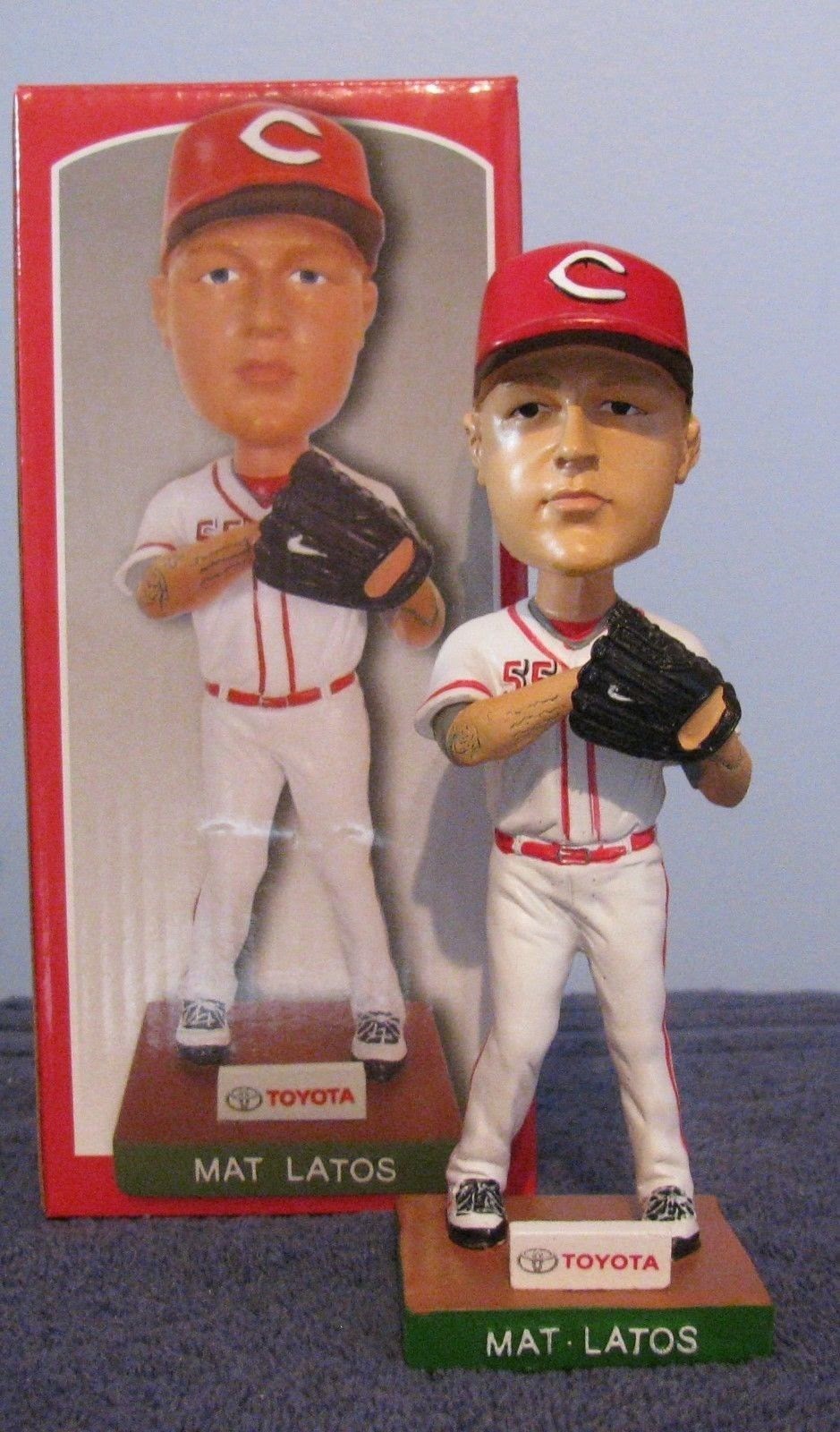 One of the nice things about a player leaving the team is that if that player has a bobblehead, it instantly becomes more reasonable to purchase. Last week I purchased my first bobblehead in over a year. Mat apparently didn't have any kind words for the organization when he was shipped to Miami in the off-season and I'm a little bummed that he won't be sporting a Cincinnati uniform since he was a decent pitcher for the Reds. With the impending loss of Cueto and Chapman at the end of the year, I shudder to think what might become of the Reds starting rotation and bullpen. The Reds had 30,000 of these bobbleheads to pass out on June 5, 2013 against the Rockies (although not that many fans showed up for the game). This is my first bobblehead where the sponsor is Toyota. I am excited for a few of the bobblehead releases the Reds have scheduled for this year...my favorite being the Nasty Boys bobblehead featuring Dibble, Myers and Charlton
Posted by Reds Card Collector at 10:52 AM 2 comments: 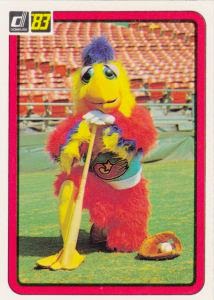 I remember the days of my youth when every Saturday I would sit down and watch cartoons on NBC from 8 to noon. Those were good days. In addition to my cartoon binge I would catch the weekly episode of "This Week in Baseball" that followed my toon watching. I'll never forget when they had appearances of the San Diego Chicken - and for whatever stupid reason - that was always the highlight of that show. I only discovered recently, since I didn't collect Donruss when I was growing up, that they made a card of the San Diego Chicken. Say hello to my latest addition to my album of amazing, a 1983 Donruss San Diego Chicken!
Posted by Reds Card Collector at 10:42 AM No comments: