A Glutton for Punishment 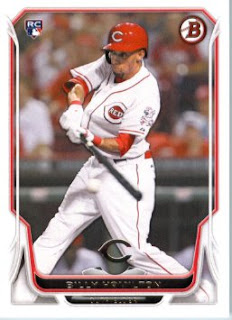 I admire our blogging community and the projects they set out to accomplish. Whether it's building a pre-war card set, chasing down every 1/1 that's ever been produced of a player, to owning relic cards of Hall of Fame members, we do it all. One of the projects that's fascinated me was collectors chasing multiple cards of the same issue. Gavin over at Baseball Card Breakdown has been acquiring 1990 Marquis Grissom rookie cards in an attempt to possess 1000 of the same card. While some may call it hoarding, I see it as dedication and I've decided to join their ranks. I've decided to try and obtain 800 2014 Bowman Billy Hamilton #132 rookie cards. 800 is a nice round number that I know will fit in a 3" binder. I've created a new page on the blog to track my progress on this quest. So if you have any 2014 Bowman Billy Hamilton's sitting around, feel free to send them my way :)
Posted by Reds Card Collector at 9:52 AM No comments: 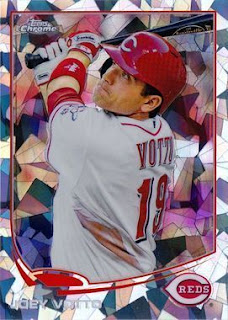 A few days ago I was browsing on COMC looking to pick up some Pete Rose cards for my Rose PC, since they're currently running a spring cleaning sale. While there were some Rose cards I found that I wanted to pick up, they had to wait because I stumbled upon this card. Numbered 8/10, this 2013 Topps Chrome Atomic Refractor Joey Votto was too good to pass up. I spent more than I wanted to on the card, but this is the first atomic refractor I've seen of this card since I started my Votto rainbow last year. With this card, I'm just six away from completing this project. I'm still on the lookout for the following if anyone knows were I can grab them: 2013 Topps Opening Day Purple, 2013 Topps Orange Factory #ed to 230, 2013 Topps Silver Slate Platinum #ed to 10, 2013 Topps Mini Black #ed to 5, 2013 Topps Chrome Camo #ed to 15, and a 2013 Topps Chrome Pink #ed to 5. Not sure if I'll ever get these cards, but I'm holding out hope.
Posted by Reds Card Collector at 11:40 AM No comments:

I haven't had much time to blog lately, but I have had an opportunity to purchase additional cards for my album of amazing project. I had thought about posting the cards separately, but with limited time I just decided to show them here in one post.


1981 Topps Al Hrabosky
With a stache like that, it's worthy of a spot in the album. 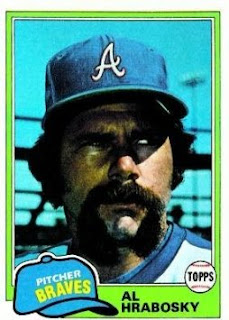 1989 Upper Deck Nolan Ryan
Not much of a football fan, but I'm a huge fan of the Ryan express. Besides, I think it's the earliest example of a player tossing a football on a baseball card. 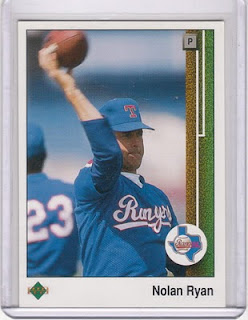 1990 Upper Deck Bill Buckner
I always think back to the 1986 World Series when I see this card. I was cheering for the Mets that year and had a bet with my brother who was rooting for Boston. 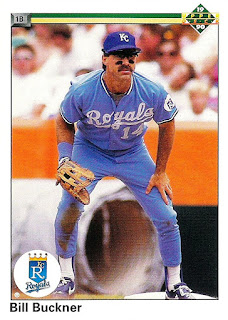 1994 Collectors Choice Greg Olson
Sure, ATVs are a part of America's national pastime. 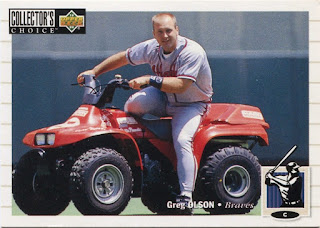 1994 Topps Devon White
I always like receiving cards in the mail and I'm positive Devon White does as well. 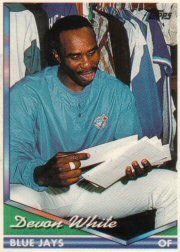 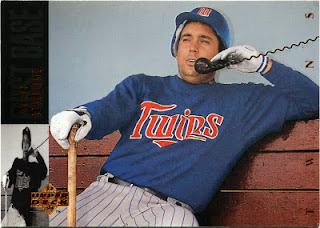 1995 Collectors Choice Chuck Carr
Is it me or is Mr. Carr enjoying Mark Grace touching his butt? 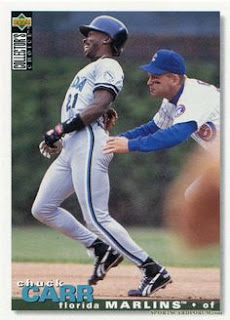 1995 Pinnacle Jose Rijo
What fans at the ballpark didn't know was that Jose was spraying opposing team fans with skunk spray! 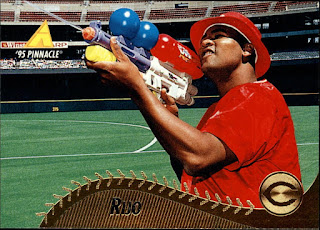 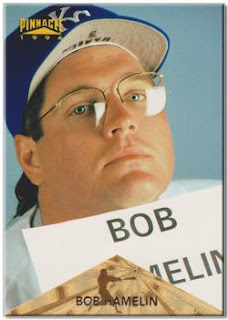 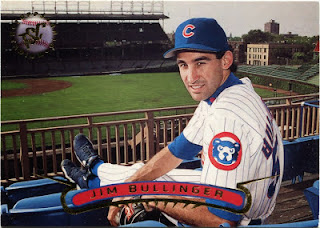 1997 Collectors Choice Alex Ochoa
One of the most difficult things in sports, balancing while holding a tiny blue ball. 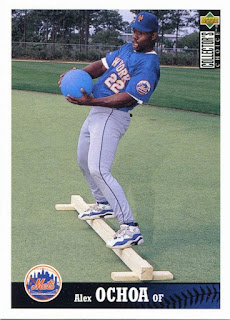 1997 Upper Deck Jason Isringhausen
It's always cool to see ballplayers taking pictures. It's even more cool to have a player with the last name of Isringhausen as part of your collection! 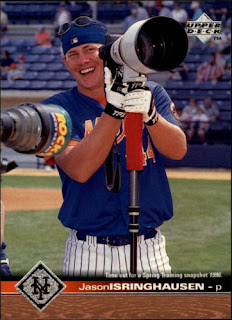 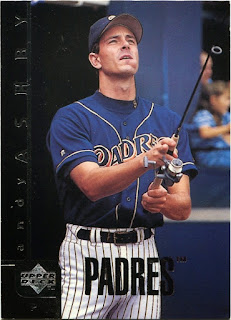 1997 Fleer Tradition Scott Spiezio
I've always been fascinated with individuals who can juggle. It's nice to see it captures on a baseball card. 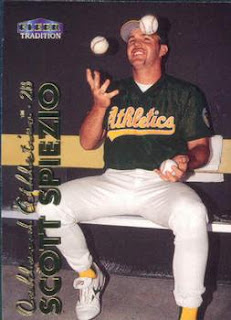 With the progress I'm making, I should have this project wrapped up by the end of the year!
Posted by Reds Card Collector at 9:20 AM 5 comments:

That's the most foul, cruel, and bad-tempered rodent you ever set eyes on! 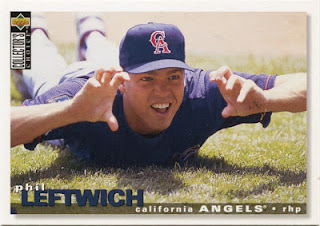 Have you ever seen a card and it reminds you of something? A favorite book, perhaps a certain moment in time, or someone you might have once known. This 1995 Collectors Choice Phil Leftwich reminds me of one of my favorite British comedies, Monty Python and the Holy Grail. As such, it automatically earns a spot in my album of amazing binder. You might be asking yourself how so, in which I would reply that Mr. Leftwich reminds me of the vile creature that protected the Cave of Kyre Banner. Not sure what I'm talking about? Just watch the video below.

Posted by Reds Card Collector at 10:35 AM No comments: 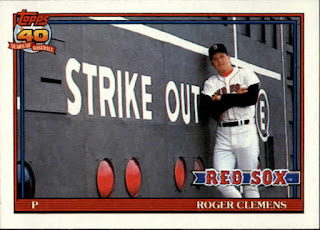 The more I look at this hobby and my collection, the more I'm drawn back into the cards I once had and the cards I had always wanted growing up. Right before I exited the hobby I purchased a TON of 1991 Topps (both flagship and Stadium Club). While Stadium Club had an advantage because nothing like that had ever been produced before, the flagship had a lot of cool photos including this 1991 Topps Roger Clemens. This card was a no-brainier to add to my album of amazing. I'm not going to analyze every detail of this card because it's already been talked about on numerous other card blogs. What I will say is that I had a lot of respect for Clemens when he played for the Red Sox back in the mid to late 80s and early 90s. I know his chances for Cooperstown remain in limbo, but he's still one of the greatest pitchers to ever play the game. On a side note, I always think of Def Leppard's song Rocket when I see any card of Clemens. 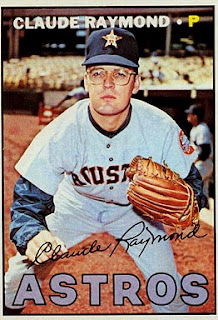 That's what the photographer should have said to Claude Raymond before taking this picture back in the 1960s. I wonder what Claude's reaction was when he first saw this card. It's bad enough to have this pic used for his 1967 Topps card (my latest addition to the album of amazing), but poor Claude Raymond has his fly open on his 1966 Topps card as well.
Posted by Reds Card Collector at 9:49 AM 2 comments:

I Make This Look Good!

So my Reds blew another game last night. Up 4-0 in the 9th and they lose 5-4 in 11 innings. I'm not sure when the fire sale will commence, but I'm sure that it will be soon and when the dust settles I can guarantee that Cueto and Chapman will no longer be on the roster when July comes to a close. This year has been a huge disappointment for me. While I wasn't expecting great things from this ball club, I wasn't expecting them to race with Milwaukee to the bottom of the division. Anyway, I'm not really in the mood to post about baseball cards today so I decided to showcase a couple of my jersey I sport whenever I attend a Reds game. I'm in the process of adding sleeve patches to both (the 25/10 year patch that the Reds wore with their pinstripe jersey in 2000 and a Mr. Redlegs patch that's on their current jerseys). I do have a Cleveland Indians blue home jersey but this blog isn't devoted to the tribe. I'm also contemplating picking up a yellow Athletics jersey because I was a huge A's fan growing up when Oakland had Canseco and McGwire. What about the rest of you out there? Do you have a favorite jersey hanging up in your closet? 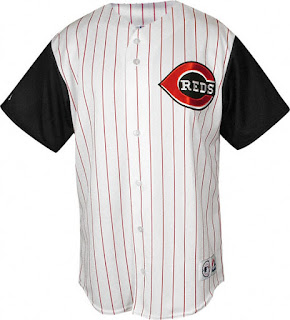 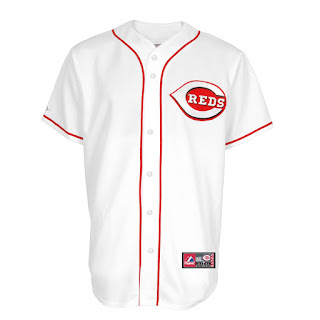 Posted by Reds Card Collector at 6:12 AM No comments: 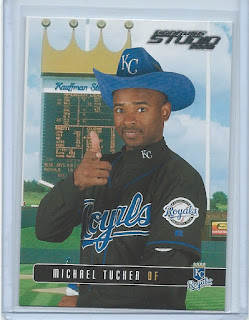 I'll be honest, I'm still surprised that the Kansas City Royals made it to the World Series last year. As a baseball purist and National League fan one would assume that I would have cheered for San Francisco during that series. But no, I was in Kansas City's corner because it had been so long since they were crowned champs compared to the Giants. While looking for cards to complete my Album of Amazing project, I stumbled upon this 2003 Studio Michael Tucker card. There really are a variety of great Royals cards out there to grab even if you're not a fan of the franchise. I've always been a huge fan of Studio cards and I'm still sad that they're no longer being produced. If Panini were to revive the brand I don't think I could find myself chasing the cards. While I have been purchasing Panini cards of Pete Rose to fill my PC of the Hit King, I can't chase a set that's completely null and void of team logos. It just wouldn't be the same. I am glad to add this fine "original" studio specimen to my album.
Posted by Reds Card Collector at 8:03 AM 2 comments: 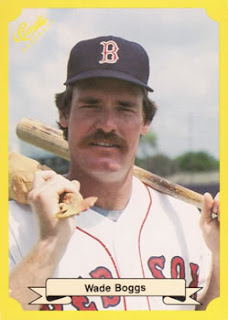 Behold, the latest addition to my album of amazing project. This 1987 Classic Wade Boggs truly is an amazing card. Bat in one hand and chicken in the other. It doesn't get much better than this.
Posted by Reds Card Collector at 11:46 AM 2 comments: