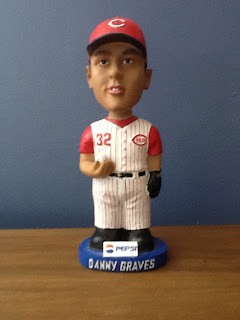 There was a time when the dominant closer for the Reds didn't have the last name of "Chapman". This closer was a lights out kinda guy who you could call up from the bullpen with the game on the line as you nursed a one-run lead with the tying run at the plate and not worry about blowing the save. That is until he started having issues with getting guys out (after some solid seasons of success), the fans lose confidence in him and start to boo as he jogs out from the bullpen, and finally said closer gives the one finger salute to the fans thus ending his stay in the Queen City. I was always a fan of Danny Graves due to the fact that being the closer has to be the toughest job of any ballplayer. You're either the hero or the goat and there's a very fine line separating the two.
This past week I was able to cross off another bobblehead from my wantlist, bringing my collection of nodders to 29. The Reds gave out 10,000 of these nodders on August 17, 2001 as they took on Milwaukee. Needless to say, Cincinnati lost that game 5-1 with their only run being a Griffey RBI in the bottom of the fifth. It's interesting to note that Jose Rijo pitched the last two innings of the game for the Reds and didn't surrender any runs to the Brewers.
Posted by Reds Card Collector at 8:22 AM No comments: 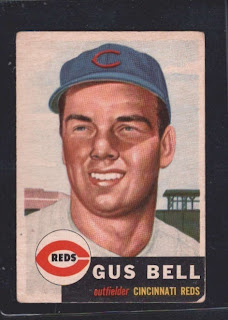 Last week I was FINALLY able to start making a dent in my 1953 Topps Cincinnati Reds team set. I have mixed feelings for the 1953 set when I compare it to the 1952 set. While the photos seem so much more alive with color than 1952, I'm a little disappointed that Topps placed the signatures on the back of the card, sort of as an afterthought, instead of having them front and center on the front. I do find comfort in the fact that every single Reds card in this set has settings from the ballpark in the background instead of just a plain background color that was on some Cincinnati cards in the 1952 set. I will say that this is one of the better designs of the 1950s that Topps put out, IMHO, compared to the 1954, 1955, and 1958 sets. Besides, you really can't go wrong with vintage cardboard now, can you.
Posted by Reds Card Collector at 11:05 AM No comments:

Another Goal Put to Bed! 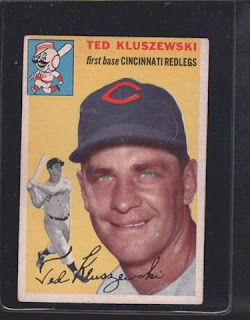 For the past few months I've been neglecting my card collecting goals for the year by opting to chase after some bobbleheads and a World Series ticket that I had always wanted. This week, however, I decided to take a break from the nodders and chase after some vintage Topps cards that I had been eying for a while but just never pulled the trigger on. I'm very happy to announce that I have now completed my 1954 Topps Redlegs team set. One of the last remaining cards in the set was this Ted Kluszewski card. I was also able to grab my first 1953 Topps Reds cards in the process (which I will be posting about next week). Not everything was rainbows and unicorns this week as I found out that I had missed a card from my 2011 Topps Reds team set. Card #198 is MIA and has been added to my wantlist. The regular version of this card is Buster Posey, but I'm not after that one. Nope, instead I found out that there's a short print 198 that's none other than a Johnny Bench parallel. These short print parallels will be the death of my collecting!
Posted by Reds Card Collector at 10:13 AM No comments: 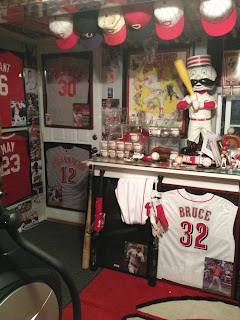 It's amazing what you can find when your browsing around online. Yesterday I decided to take a look on ebay for some game used Cincinnati Reds memorabilia and I came across a listing from cincykid-dan61 for a Ramon Hernandez autograph jersey and noticed some of the additional pictures he had posted. I can only assume that the photos are of a room in his house that he has dedicated strictly for displaying his Reds goodies. Very impressive if I do say so myself, especially the giant Mr. Redlegs statue. While I am working on completing my very own Cincinnati Reds Man Cave, I don't think that I'll pack it to the gills because, in my opinion, that's sensory overload. I don't think I could sit back, relax and watch a Reds game surrounded by that much stuff. Then again, I guess it all comes down to showing off your collection and your love for the team. 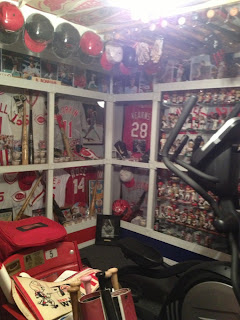 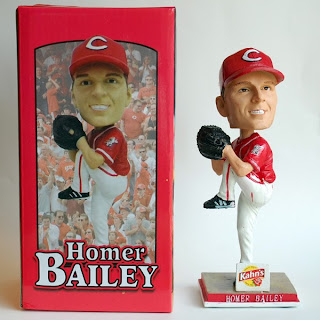 I was fortunate enough to purchase this nodder a few weeks ago just before Homer Bailey threw his second no-hitter. I like that the sponsor for this promotion was Kahn's (I guess they do more than baseball cards). There were 30,000 of these handed out to fans on July 31, 2010 when the Reds faced Atlanta. Cincinnati ultimately won the game 5-2. This marks the 28th addition to my Reds bobblehead collection.
Posted by Reds Card Collector at 9:49 AM No comments: 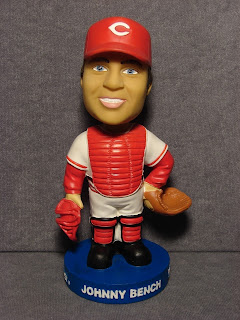 In addition to the 1940 World Series ticket I snagged from selling my 2011 Toppps Gypsy Gueen master set, I had enough left over to add this outstanding bobblehead to my collection. There were only 10,000 of these nodders given away at the game on May 31, 2002 when the Reds were blanked by the Atlanta Braves 7-0. I will say that this is probably my most favorite bobblehead that's in my collection, followed closely by my Pete Rose and Dusty Baker bobbleheads.
Posted by Reds Card Collector at 10:34 AM 1 comment:

Last year I completed my master set of 2011 Topps Gypsy Queen. While I was happy with the design of the cards, for some reason I just had this nagging feeling that it didn't belong in my collection. The old school ballplayers were great, but the more I thought about the set the more I started feeling as though those cards were always second class compared to a card from the year that player graced the field. So, I got rid of the set and decided to pick up a few things that I had my eye on for quite some time but never had the funds to grab them. The first is what you see above, a ticket from the 1940 World Series. This is my fourth World Series ticket (1975, 1976, and 1990 being the others) in my collection. The Reds won this series in seven games over the Detroit Tigers. This will probably be the last ticket I have in my collection until the Reds win another title. I've decided not to chase tickets to series where they were the bridesmaid for that season. I know that I could still go after a ticket from the 1919 World Series, but $2,000 seems a little steep for me at this point in my lift. I will accept donations though from anyone out there that has one lying around that they no longer need.
Posted by Reds Card Collector at 10:06 AM 1 comment: