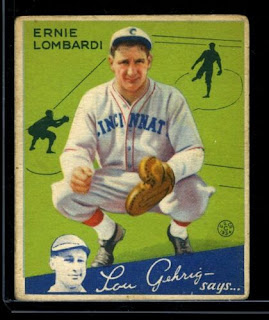 This is my second Goudey Reds card from the 1934 set. This was one of the more expensive cards I'm chasing in this set, the other being Chick Haffey. Lombardi was voted into the Hall of Fame in 1986 by the Veteran's Committee. In addition to being known for his big nose, hence the nickname, but also for "Lombardi's Big Snooze" during the 1939 World Series. According to Wikipedia, during the fourth game of the 1939 World Series, in the 10th inning, with the score tied and runners on first and third, Joe DiMaggio singled. One run scored, then Reds outfielder Ival Goodman fumbled the ball. Yankees right fielder Charlie "King Kong" Keller, well known for his sturdy physique, beat the throw to catcher Lombardi and inadvertently hit "The Schnozz" in his groin. Unfortunately for the Reds and Lombardi, he had failed to wear his protective cup and Lombardi was in pain and dazed. DiMaggio raced around the bases and scored while the ball was just a few feet away from the dazed Lombardi. The press was hugely critical of the sensitive catcher because of this and it came to be known as "Lombardi's Big Snooze".
Posted by Reds Card Collector at 6:53 AM 2 comments: 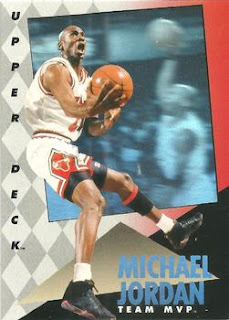 I don't have a lot of NBA cards and considering this blog is devoted to a baseball team I guess this post would be considered an oddity. This is one of those sets I picked up back in the 90s, sold years ago to downsize my collection, and then reacquired a few months ago due to remorse for letting it go in the first place. The 1992-93 Upper Deck NBA MVP Hologram set is a boxed set that consists of 37 cards. There were a paltry 138,000 sets produced so I guess you would consider that limited in 90s standards. The checklist for this set is pretty strong with many Hall of Fame players including Jordan, Drexler, Malone, Wilkins, O'Neil, and Robinson to name a few. I think the overall card design is fantastic and screams the 90s in a Saved by the Bell kind of way. Anyway, I'm glad this set is once more part of my collection.
Posted by Reds Card Collector at 9:49 AM 2 comments:

12 cards total in this set. A much improved design over the 1949 Bowman set. My only gripe is the small card size, but Bowman fixed that with their 1951 release. 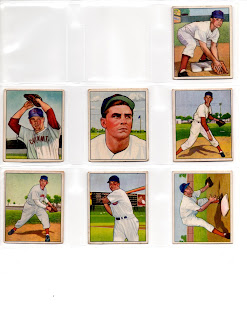 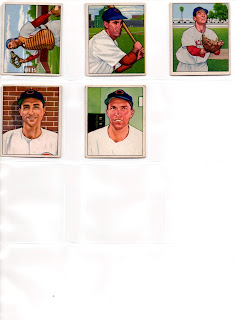 Posted by Reds Card Collector at 1:10 PM No comments:

There's a total of 12 cards in this set. Bowman decided to add some color to this year's release instead of sticking with the black and white photos that they used the previous year. The other noticeable difference are the name plates that are found on the front of the higher numbered cards. 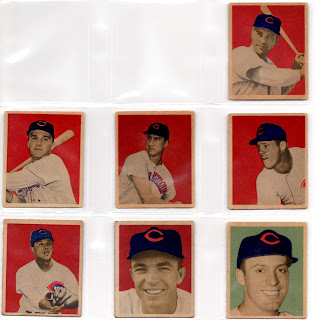 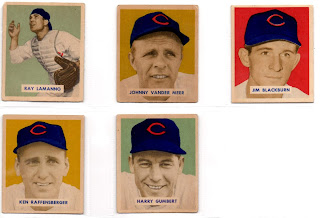