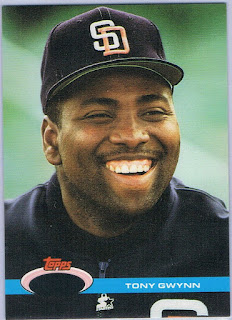 This year has been for me, and many, a tough year to get through. It's almost as if it's the year that wasn't...but was. From March through December it just felt as though I was living in some parallel universe where nothing was the same yet it seemed that everyday was a repeat of the day before. Almost like the movie Groundhog Day, but on PEDs. I just kind of wandered through this year in a haze and it's been reflective in my hobby as well. Sure I was able to put together this year's Topps Cincinnati Reds flagship set. I'm grateful that there weren't any super short prints for me to chase. But other than that I didn't really collect much. That being said, I did start on one more 1991 Stadium Club set this year. While I have the baseball, football and hockey sets from 1991 as well as the baseball pre-production set, there's still a couple of Members Only sets I would like to get but those are small potatoes compared to what I'm building right now. I was able to purchase a huge lot of press proofs a few months back. In fact, the lot I purchased was the entire series 1 set with the exception of Rickey Henderson. Luckily I was able to track him down on comc as well as the hall of famers and rookies in series 2 so now I just have commons to chase. Since I'm two thirds of the way done with the set I'm hopeful that sometime next year or perhaps 2022 I'll be able to wrap it up. The difference with these proofs compared to the regular stadium club cards is that there's no gold foil and no UV gloss protection on the card. It's almost like an empty stadium club card. Personally I think they're great and it's been a fun project thus far to chase. Here's hoping to a Happy New Year to us all. Hopefully 2021 will make us smile again like Tony here.

Posted by Reds Card Collector at 8:45 AM 6 comments: