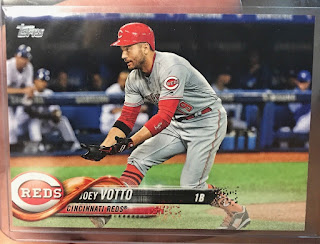 Back in June when I was talking about 2018 Topps I mentioned the various Reds short prints that are included in the release. One of those cards I spoke about was this particular Votto Super Short Print. At the time, these things were going for more than $50 a piece and I made the comment that this card would probably never enter my collection with the steep price tag these cards were commanding. Well, fast forward two months later and I was able to snag this card off eBay for less than $30 shipped. Is that still a lot to pay for a card that was produced this year? You bet. However, when you factor in that odds for pulling a SSP is 1:866 packs I think it's a fair price to pay for the card. There are still two SSP cards that I don't have but maybe one day I'll be fortunate enough to add those to my binders as well. The first is a 2017 Votto Gatorade bath and the second is this 2013 Topps Teddy Kremer. 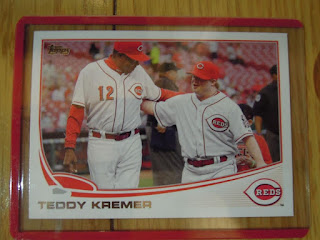 Teddy, who has Down Syndrome, is a huge Reds fan and was an honorary bat boy for the Reds. He was recently honored this past year with his own bobblehead. There were only 1000 bobbleheads produced and distributed on July 20th.
Posted by Reds Card Collector at 8:17 AM 2 comments: