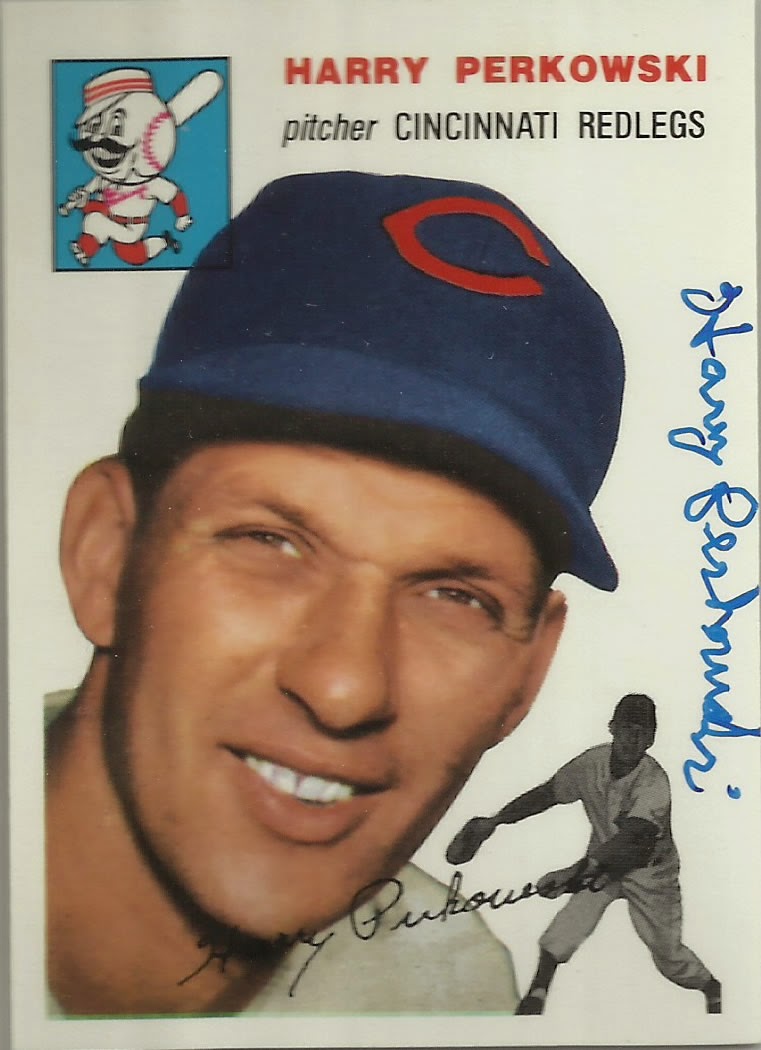 Did you know that Harry Perkowski joined the amphibious force during WWII, helping escort troops and tanks into hot spots on landing craft tanks. He served 19 months in the Atlantic and 11 months in the Pacific including four invasions during the war in Africa, Sicily, Italy and Normandy.
Posted by Reds Card Collector at 9:36 AM No comments:

Email ThisBlogThis!Share to TwitterShare to FacebookShare to Pinterest
Labels: Harry Perkowski, Through the Mail 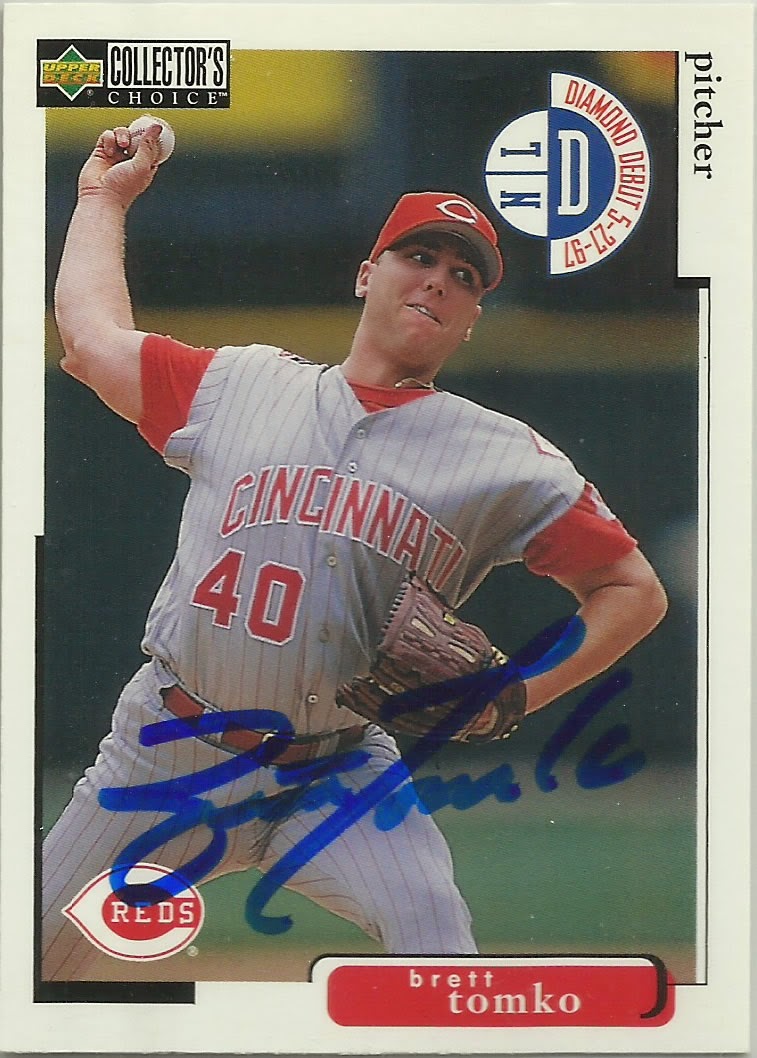 Did you know that Brett Tomko made his major league debut with the Reds on May 27, 1997 against the Phillies? He pitched six innings and gave up two runs in a 2-1 loss to Philadelphia.
Posted by Reds Card Collector at 10:34 AM No comments:

Email ThisBlogThis!Share to TwitterShare to FacebookShare to Pinterest
Labels: Brett Tomko, Through the Mail 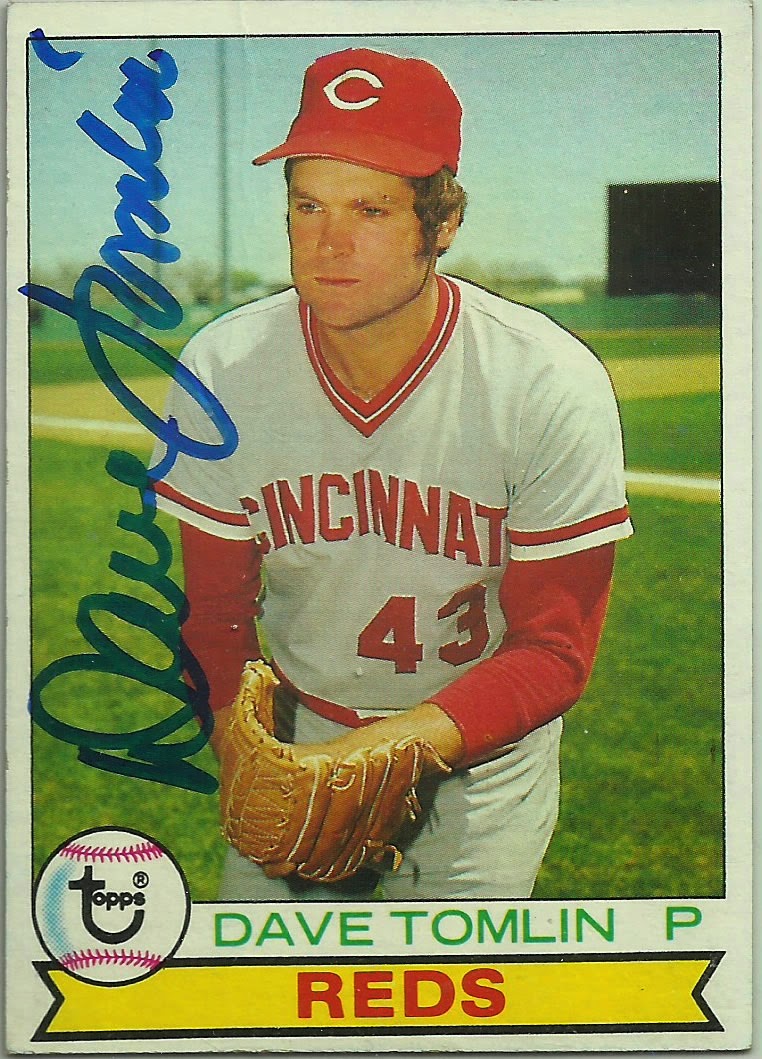 Did you know that Dave Tomlin made his major league debut with the Reds on September 2, 1972? He's currently a coach with the GCL Red Sox.
Posted by Reds Card Collector at 10:22 AM No comments:

Email ThisBlogThis!Share to TwitterShare to FacebookShare to Pinterest
Labels: Dave Tomlin, Through the Mail 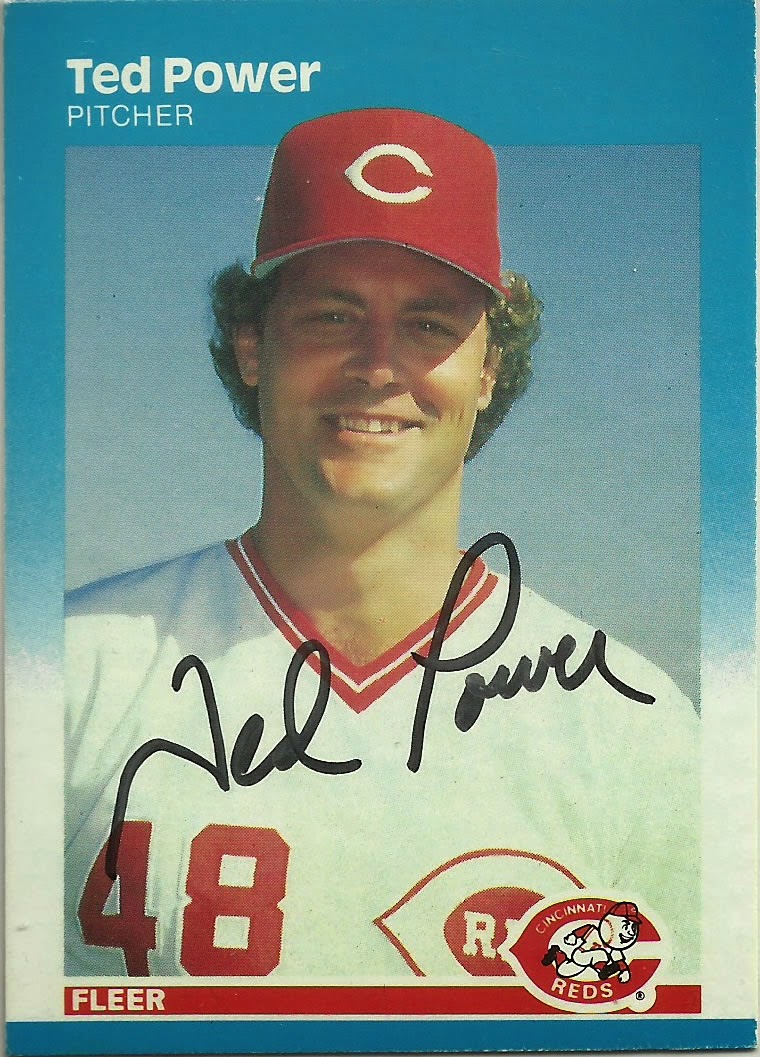 Email ThisBlogThis!Share to TwitterShare to FacebookShare to Pinterest
Labels: Ted Power, Through the Mail 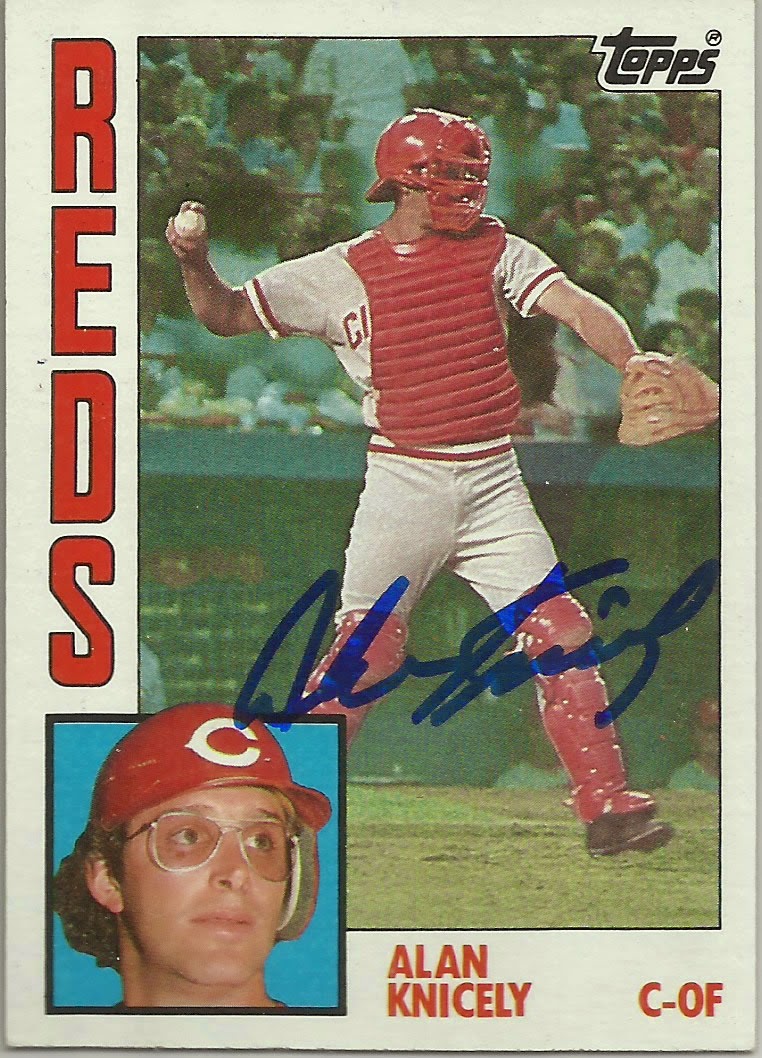 Did you know that Alan Knicely was named The Sporting News Minor League Player of the Year in 1984?
Posted by Reds Card Collector at 11:33 AM 1 comment:

Email ThisBlogThis!Share to TwitterShare to FacebookShare to Pinterest
Labels: Alan Knicely, Through the Mail

The late 80s and early 90s were the time I remember spending so much time enamored with the hobby, busting old school wax packs, flipping through Becketts and Tuff Stuffs to see what products were about to come out and what my cards were worth, and of course trading and selling cards with the guys at school. The latest two additions into the Album of Amazing are two cards I had always wanted to get during that time, but was never able to since I couldn't pull them from a pack or I didn't want to ante up and pay the card shop owners the ridiculous prices they were asking at the time. I was a huge Chicago Bulls fan during that period and when I saw that Upper Deck had released a short print of Michael Jordan in their 1991 baseball product I made it a point to one day own that card. As for the 1990 Score Bo Jackson, I had first seen that card in a glass display case at my local card shop for $10 at that time. I had always been enamored by the fact that Bo played both football and baseball (and according to the "Bo Knows" commercial at that time everything else). Patience has paid off and after more than 20 years later, I was able to get both of those cards free from COMC through their card challenges. 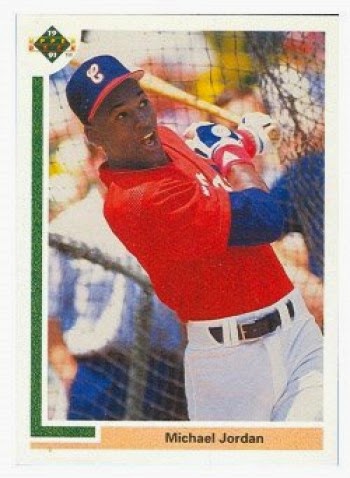 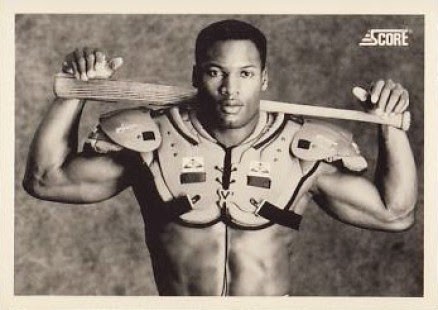 Posted by Reds Card Collector at 9:52 AM 2 comments: 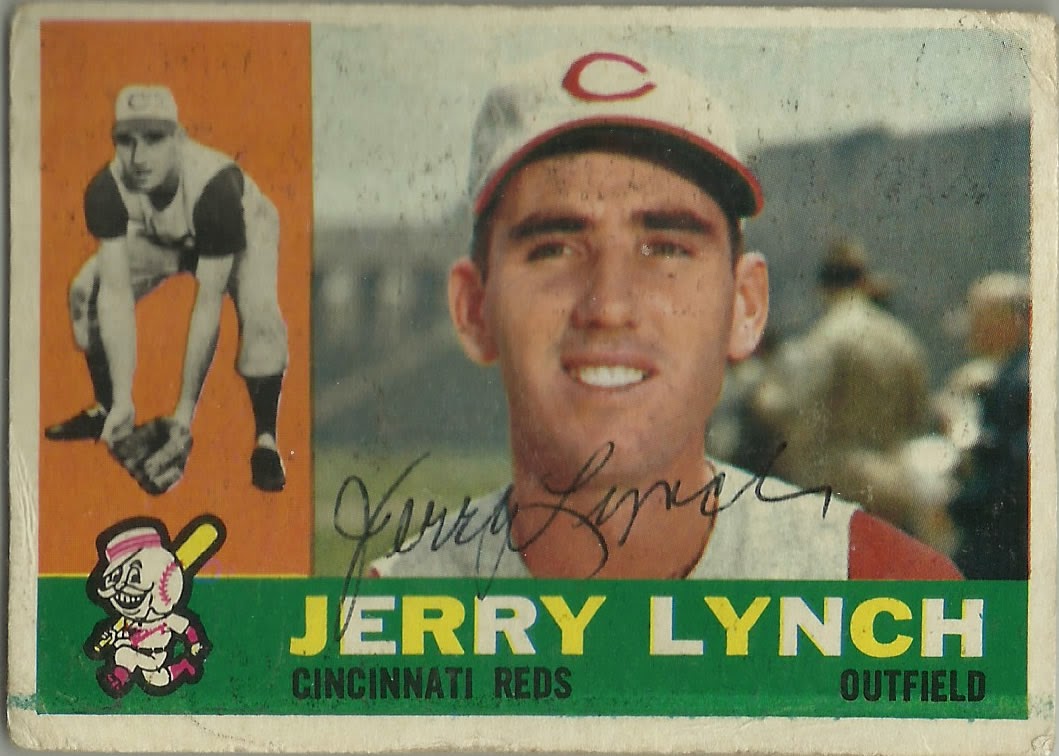 Did you know that Jerry Lynch helped propel the 1961 Reds into the World Series with a two-run home run off Cubs pitch Bob Anderson? Did you also know that Jerry is third on the list of all time pinch hit home runs? Now you do.
Posted by Reds Card Collector at 8:43 AM 3 comments:

Email ThisBlogThis!Share to TwitterShare to FacebookShare to Pinterest
Labels: Jerry Lynch, Through the Mail 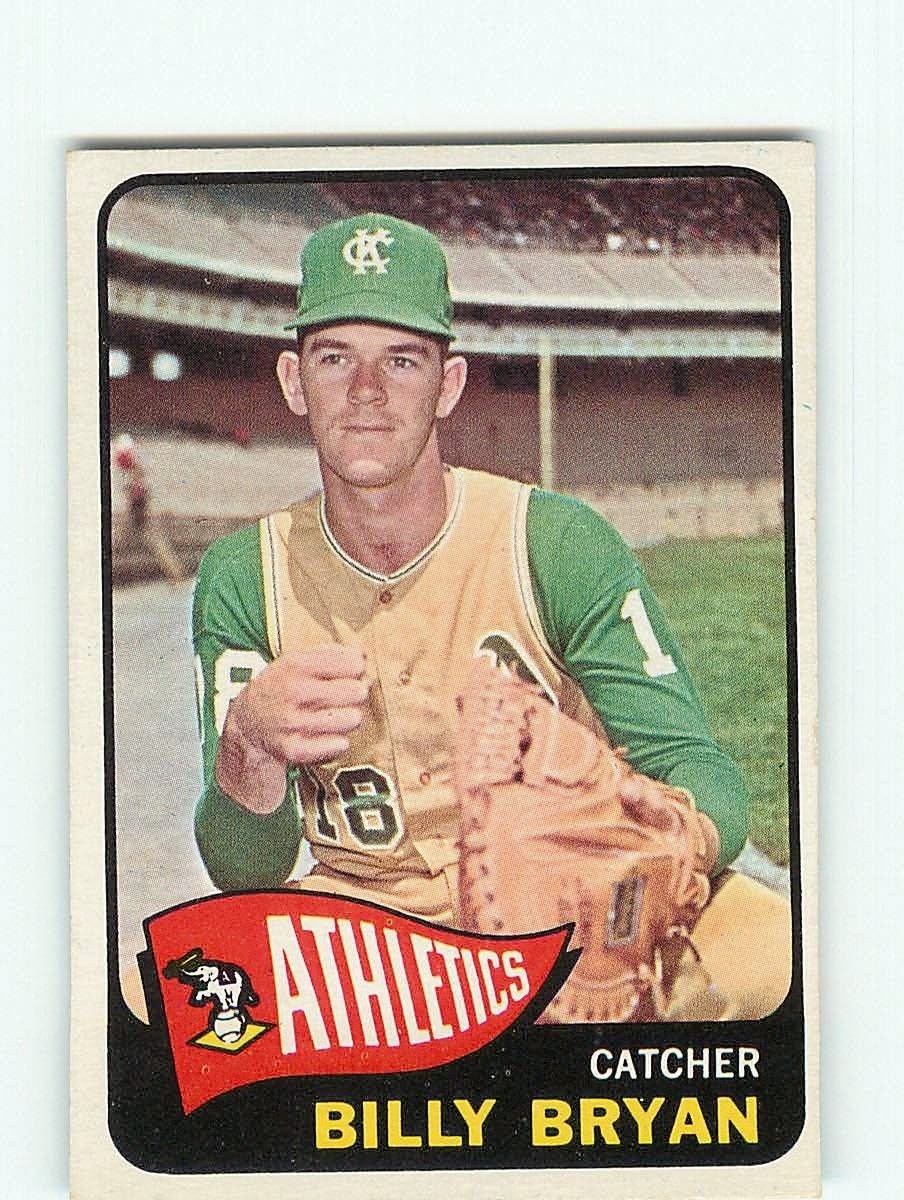 I'm sure I'll probably step on some toes with my blog title, but I want to be frank and to the point. I've never been a fan of heritage. In my opinion, it's nothing more than a way for Topps to take the easy way out and sell cards of modern players on a design that's been used once before. Where's the ingenuity in that? No, not for me I say. I almost bought into this scheme when Gypsy Queen came out in 2011 and I put together a complete set (including the short prints and all the sub sets), but last year I began to think to myself why would I want to collect a set that borders on the ideal of reprint but steers clear of that term by using current ballplayers? I decided to sell that set and pickup a 1940 World Series ticket as well as a couple of other items and I haven't regretted the decision. When this year's Heritage came out I was tempted to put together the set. I loved the design with the pennants front and center. Then it occurred to me, why not collect the 1965 Topps set? There's a lot of history in that set with teams that are no longer around (sort of) like the Kansas City Athletics, the Houston Colt .45s, and the Washington Senators. There's great photography of players that are no longer with us, stadiums that have succumb to the sands of time, and advertisements of companies that shut their doors permanently years ago. What's not to like about this set? I decided to make the 1965 Topps set one of my collecting goals of 2014 (not collecting the entire set this year, but rather starting on it). I'm proud to say that this past week I was able to pick up my first 15 cards of this great set. It'll take me some time to complete, but I'm glad that I've taken my first steps in completing this beautiful set.
Posted by Reds Card Collector at 6:48 AM 2 comments:

Who wants to drink from the fire hose? 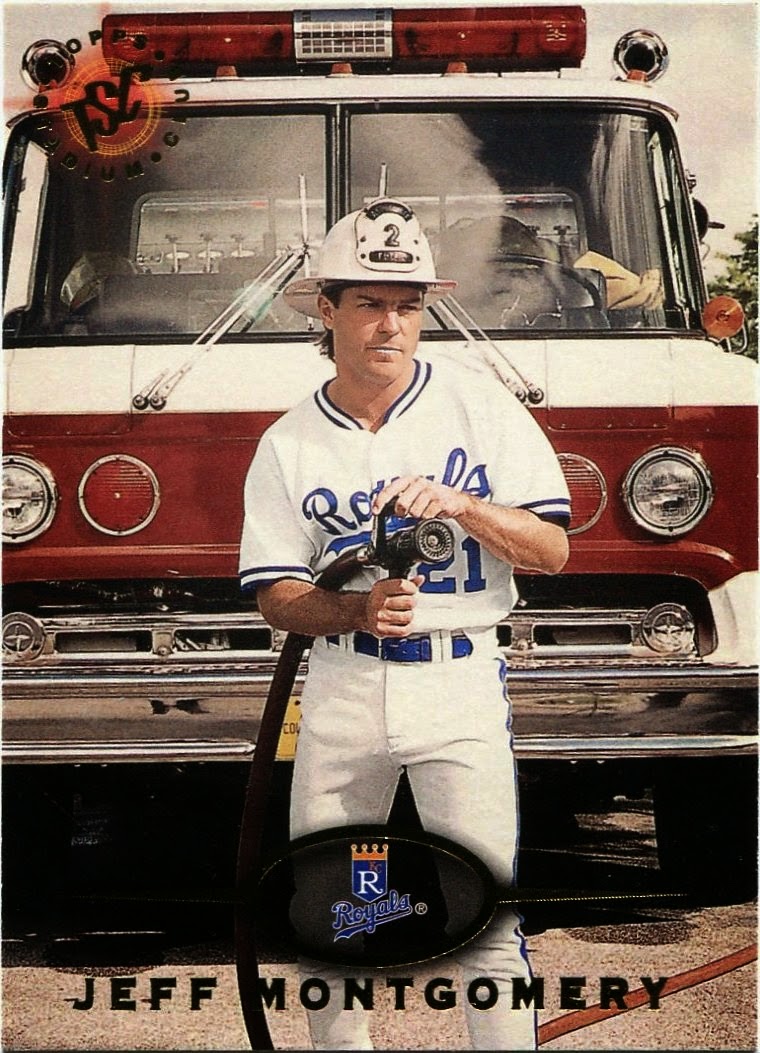 I enjoy spending some time each day reading what Nick over at Dime Boxes-The Low End Baseball Card Collector's Journey has come across in his search of dime boxes. A few weeks back Nick posted this 1995 Stadium Club Jeff Montgomery card he received from a fellow blogger and I immediately was in awe of it's subject matter. It immediately earned a spot in my album of amazing and I was able to pick it up for free with credits I had amassed over at COMC. This is my eighth entry into the "Album of Amazing" and it really is a great card. Every time I look at this card I'm reminded of a scene from the movie UHF where Stanley Spadowski rewards a kid by letting him drink from a fire hose. If you haven't seen the movie, it's worth checking out.

7th Entry into the Album of Amazing 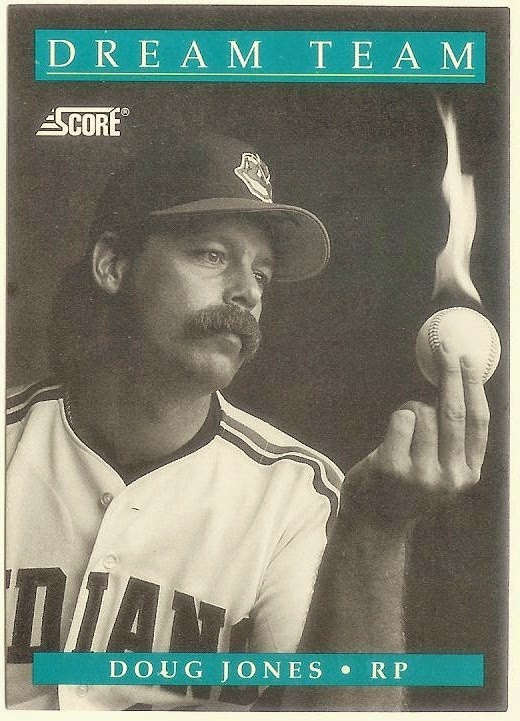 Yesterday I was able to attend my first game of the season and it was a blast! I took my wife's uncle, who was in town from Cincinnati to see the Indians and Rockies play. He had not been to Progressive Field before so I offered to watch a game with him. I was able to land to great seats close to home plate for $35 a piece. We almost had a foul ball drop in our lap (if we had been sitting two rows up it would have been ours). But the icing on the cake was witnessing my first walk-off home run to end a ballgame. The Reds have been and always will be my team, but since I've lived in the Cleveland area from more than 10 years now, the Tribe has started growing on me. I don't mind cheering for the Indians, just not when they're playing the Reds. Which leads me to my seventh card in this project. I remember seeing this card growing up at the local card shop and thinking that it was one sweet card. Doug Jones staring at a baseball on fire....smokin! I knew I had to have that card someday and with me starting the Album of Amazing project this year it gave me a reason to purchase it.
Posted by Reds Card Collector at 10:32 AM No comments: