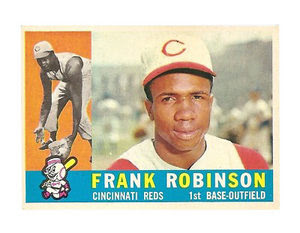 Here I am talking about another set from the 60s... 1960 to be precise. I don't know what it was about Topps when they were putting sets out in the 60s, but I think that the 60s were by far the best decade for Topps and this set is no exception to that statement. I love the horizontal design and the portrait pictures. The small side images on the front of the card are ok, and I can see that Topps was trying to place an action photo on the card to make it more interesting and some work out well while others, not so much. I would like to see Topps put out a modern set with a horizontal layout (and not called Heritage), but I doubt if that happens anytime soon.
Posted by Reds Card Collector at 10:02 AM No comments: 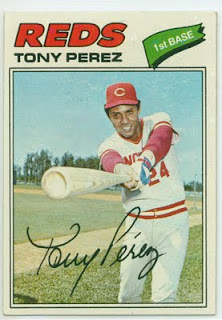 Here's another set from the 1970s that I love. For whatever reason, the set reminds me of a hybrid between the 1964 and 1965 Topps sets (white borders from 64 and the pennant from the 65 set). It also seems to me that for the past 35 or so years Topps has rehashed a lot of their base set designs from older sets....not that I'm complaining, but I guess there's only so many ways you can design a baseball card. Which leads me into my next rant. I hate it when card companies take an old design and stick current players on that design (Topps Heritage, Bowman Heritage, Fleer Tradition). Come on! That's why there's still such a glut of product on the market with rehashing stuff from the 30s 40s 50s and 60s. Anyway, back to the 1977 Topps set. I had fun putting this team set together and my favorite card from this set would have to be the Tony Perez card. I think it's so sweet how he's pointing the end of the bat barrel right at your face! Very sweet! Too bad the Reds couldn't make it three championships in a row that year....but hey....no one's perfect.
Posted by Reds Card Collector at 9:38 AM No comments: 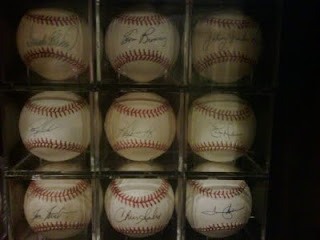 Although Robinson (and probably Griffey) was elected to the Hall of Fame not as a Red, he did spend time with the club and made it in to my collection.
Posted by Reds Card Collector at 9:31 AM No comments: 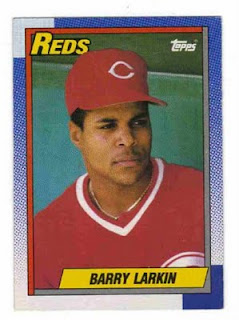 I collected this set religiously when I was 15 years old. Not sure why, but I think it had to do with trying to get one of the Frank Thomas rookie error cards that were worth a ton of money at the time....even though he wasn't a Red. The various colors used on the border of the cards was a nice change for Topps at the time, and most of the photos were clean and crisp, although they were still far behind Upper Deck on their product. While I did collect a mess of 1990 Upper Deck cards, I remained a purist and continued to collect Topps. While this is one of my favorite sets Topps produced in the 90s, I know it'll never be worth anything due to the massive overproduction of cards during this period. But collecting isn't suppose to be about money but rather the love of the game.....right?
Posted by Reds Card Collector at 9:51 AM 1 comment:

Email ThisBlogThis!Share to TwitterShare to FacebookShare to Pinterest
Labels: 90s 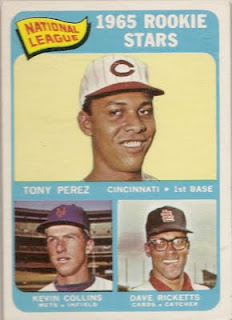 How can you be a baseball fan and not love pennants? That's probably one of the reasons I like the 1965 Topps set. The team name on the pennant and the light blue border on the card is just a sweet design. This set took me some time to put together since it's Rose's third year card, which can be a little pricey to find one in excellent condition, and Tony Perez's rookie, which is a high-number no less. Regardless, this has to be my most favorite set of the 1960s and one of the best designs Topps every put on a baseball card.
Posted by Reds Card Collector at 9:30 AM No comments:

Did I mention I collect autographs too?! 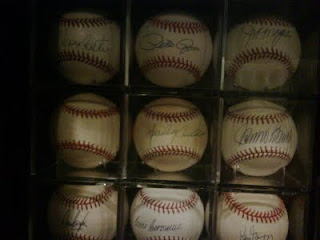 In addition to collecting Topps Cincinnati Reds baseball cards, I'm also collecting autographs of past and present players. One of my most favorite successes is the great eight of the Big Red Machine (Pete Rose, Johnny Bench, Tony Perez, Joe Morgan, Ken Griffey, Cesar Geronimo, Dave Concepcion, George Foster) and their manager (Sparky Anderson). Although I was born in 1975 and never witnessed the Big Red Machine play, that doesn't mean I can't admire the awesome achievements they made and their dominance of the National League in the mid 70s. Carlton Fisk can wave his arms all he wants......they still lost the 1975 World Series to the Machine.....one of the best teams to ever take the field.
Posted by Reds Card Collector at 10:25 AM 1 comment: 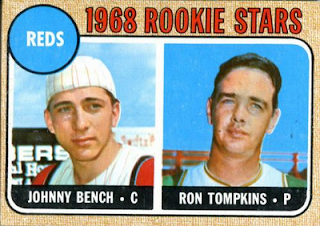 I don't know what it is about the 1968 Topps cards, but I love this set. Maybe it's the basket weave background with the team name embedded in a circle on the bottom of the card. Could be that when I first started going to card shops growing up, these were the first vintage cards I saw displayed on cork boards that were priced anywhere from 50 cents to a dollar a card for common Cincinnati Reds players (although there are no common Reds players that I know of). You can get three of the great eight from the Big Red Machine in this set (Pete Rose, Tony Perez, and Johnny Bench). The only gripe I have with this set though is that it's almost impossible to find cards that are well centered and not miscut. Guess you can't be perfect.
Posted by Reds Card Collector at 9:43 AM No comments: 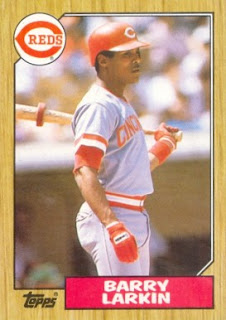 I didn't care much for these cards when they first came out (although the Barry Larkin rookie is pretty sweet) and I don't care much for them now. Maybe it's because I wasn't a big fan of the 1962 Topps set and how it's suppose to mirror a poster applied to a wooden fence, but to me the concept was just plain stupid.....no other way to put it. The only other card I like in this set is the Pete Rose player card, but I guess that's only because I'm a huge Pete Rose fan. I see Pete as a tragic hero for baseball......a man that had a passion for the game and played hard whenever he took the field, but also a man controlled by an addiction that ultimately resulted in his ban from the sport. Sad story really. Just about as sad as the 1987 Topps design.
Posted by Reds Card Collector at 9:34 AM No comments: