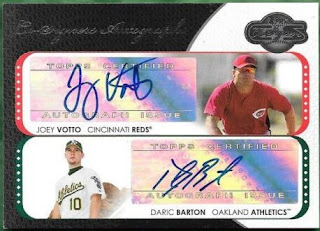 Every now and then I run across a steal of a deal when searching eBay. That being said, most of the time those deals have come and gone since someone else swooped in to grab it before I could. Case in point, I found out a few months ago a couple of sellers had listed the 2011 Topps Gypsy Queen autograph of CC Sabathia for $30. That's still one card I need from my set and of course I wasn't able to get it. Last night I was browsing for cards I still need for my 2008 Topps Votto rookie project when I stumbled across this card listed for $9.99 or best offer. I knew if I put an offer in on the card it probably wouldn't be there by the time the seller had to decide whether or not to accept. So for $9.99 I picked up this 2008 Topps Co-Signers Joey Votto/Daric Barton card. While it doesn't have a rookie logo on the card, it definitely has a home in my Reds autograph binder.
Posted by Reds Card Collector at 9:26 AM 2 comments:

I've been on the fence ever since Topps announced its Topps Now program. While the idea intrigued me that only a certain amount of cards would be produced to meet demand at that time, I didn't like $9.99 price tag for each card. That was a little too rich for me. That being said, I had an epiphany yesterday (or an apostrophy as Mr. Smee states in Hook). Why not limit my foray into Topps Now with just one player for just one year. I decided I would pick up any 2019 Topps Now Nick Senzel cards since Topps has yet to release any rookie cards of the outfielder in the flagship set this year, even though I'm sure that will change when Topps releases their Update and Highlight series this fall. I've become a fan of Senzel since he was called up earlier this year. His numbers have been decent with a .269 BA, 8 HR, and a .799 OPS in 60 games this season. Here are the four cards I have of Mr Senzel 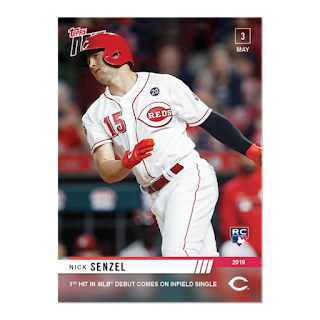 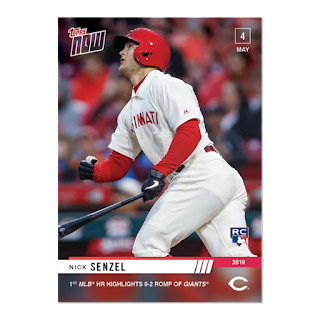 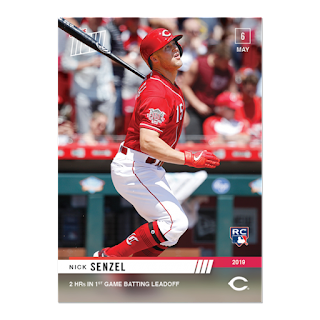 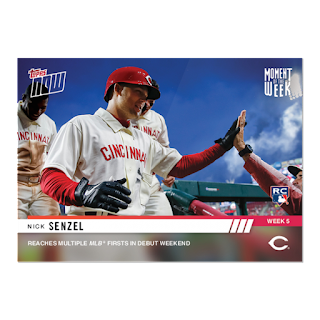 I think my favorite of the bunch is the Moment of the Week card. The 1869 Red Stockings throwback uniforms are fantastic and showing Senzel celebrate after hitting his first major league home run is icing on the cake. Just a fantastic card. I won't be chasing any other Topps Now cards after this year but it's nice to add something new to the collection even if it doesn't necessarily fit every now and then.

Posted by Reds Card Collector at 7:02 AM 2 comments: