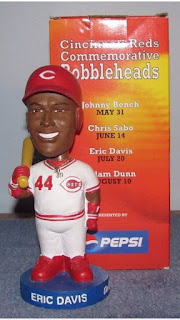 I picked up my 40th and FINAL bobblehead today, Eric Davis. This is my first Dr. Pepper bobblehead and it's fantastic. There were only 10,000 of these nodders given out on July 20, 2002 when the Reds faced the Mets. Cincinnati lost that game by a score of 8-7. I'm glad that I've finally added this bobblehead to my collection at a price I could stomach. Most of those listed on eBay were $70 or more but I was able to buy this for just a little more than half of that. now I just have to wait for this to show up in my mailbox.
Posted by Reds Card Collector at 10:03 AM No comments:

For the past few weeks I've been keeping an eye on a couple of cards that appeared on eBay under one of my followed searches. On Saturday I decided to finally purchase both card - a 2013 Topps Opening Day Magenta Joey Votto printing plate and a 2013 Topps Mini Yellow Joey Votto printing plate. I'm excited to finally be adding not one, but two new "cards" to my 2013 Topps Joey Votto rainbow project. It has been well over a year since I purchased a card for this project and I was wondering if the well had run dry with trying to find cards I still need. There are now 33 different cards that comprise this rainbow. I still have hope of trying to track down three more cards to put me at 36. I would eventually like to purchase 4 ultra pro 9 card screw down cases and display the cards on the wall of my man cave (similar to an Andy Warhol work of art). 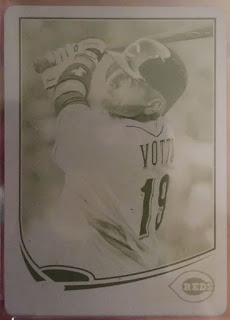 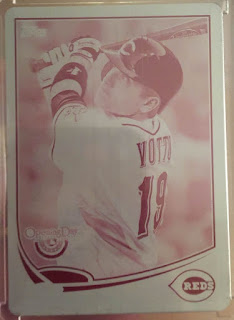 A Change of Scenery

For the past month I haven't purchased much in the realm of baseball cards. I have picked up a few Pete Rose cards here and there that I needed for my Rose PC, but nothing worth blogging about. I've also made some strides in getting my man cave set up. Hopefully that will be something that's finished in time for Opening Day. So, what have I been up to lately? I decided to get into learning guitar. I've been playing around with a Squier the past few years, but recently a buddy of mine at church was looking to sell his Fender VG Stratocaster. To say that I've been having a blast playing it would be an understatement. 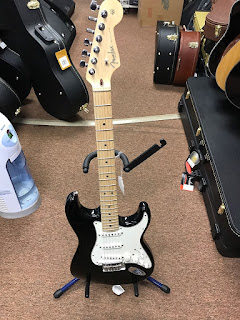 It's a black Mexican Strat with a maple fret board. The biggest thing that made me ultimately buy the guitar was the emulating options this guitar can do. I've posted a video below if you're interested. There were a couple of things I wanted to change on the guitar. I recently added some locking tuners and swapped the strings out to 9s so that it would be easier for me to play. I'll probably also replace the neck plate with a Fender logo plate just because I don't like the blank plate. I'd also like to swap the gig bag out for a nice tweed case, but that's not high on the priority list. I'll probably keep the rest of the guitar the way it is because I think it sounds great and the pickups are fantastic. I would eventually like to purchase an American Strat sunburst but that won't be until I've gotten decent enough playing to justify the cost. I am kicking around the idea of possibly modifying my Squier strat (adding locking tuners, new pickups, new bridge and block, adding an lsr nut) but I'm not sure I want to sink a lot of money into it. Anyway, I hope to put some finishing touches on the man cave and have photos for you before April 1st.