Black is a Color of the Rainbow! 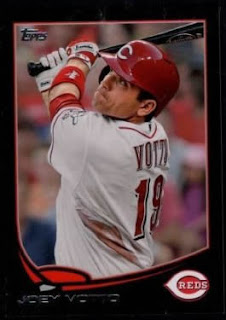 It's been a loooooooooong time since I've been able to add a card to my Joey Votto rainbow project. I had seen a 2013 Topps Chrome pink refractor a few months back that I had thought about purchasing but by the time I decided to pull the trigger the card had sold. I guess that's what happens when you procrastinate. Last week, a listing popped up on eBay for a 2013 Topps Mini black border parallel Votto numbered 1/5. It wasn't listed as a "Buy It Now" but as a standard auction. I didn't know how high this card would sell and it was the first I've ever seen this card show up anywhere. The opening bid was $9.99 and there was already a bid placed on the card when I found it with 6 days remaining. Now I normally don't condone sniping but since the listing ended just after 11pm and I'm in bed by 10, I didn't want to post a bid with an opportunity for the original bidder to respond with me fast asleep. So I placed my bid on Gixen a few days before the end of the auction and waited patiently. Imagine me surprise when I woke up the day after the auction closed and found out that I had won the card for $10.50. I was willing to spend a lot more than that, but I can't complain that I feel like I got this card for a steal. With this purchase I only need 5 more cards to complete my rainbow project: a 2013 Topps Factory Set Orange parallel, a 2013 Topps Opening Day Toys r Us Purple parallel, a 2013 Topps Chrome Camo refractor, a 2013 Topps Chrome Pink refractor, and a 2013 Topps Silver Slate Platinum parallel. 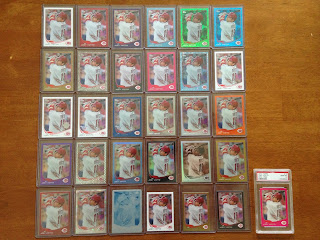 Stick a Fork In It!

This project is done! This past week I was able to purchase the last two 1991 Topps Desert Shield cards I needed for my Reds team set: Paul O'Neill and Eric Davis. I was a bit surprised how much Eric the Red set me back because he was just as much as the Barry Larkin cards I had purchased earlier. Not only that but I had only found a total of 3 Davis cards online. Talk about slim pickings. I'm glad I finally put this project to bed. Without further ado, here are the last two cards. If you're interested you can view the complete 1991 Topps Desert Shield Reds team set here. 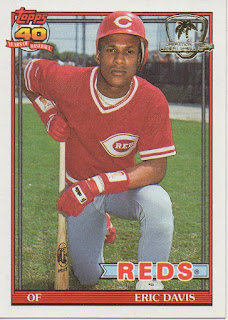 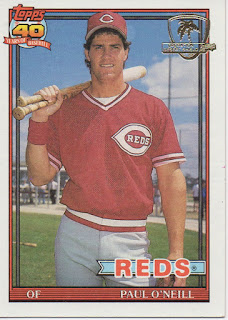 Posted by Reds Card Collector at 4:49 AM No comments: 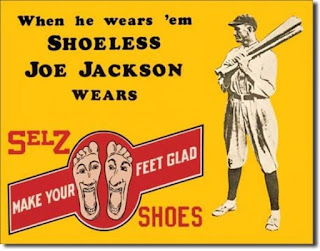 Not everything I have is related to the Cincinnati Reds. There are a couple of sets that I've been working on or have completed that deal nothing with the Reds. Case in point, I have a couple of Stadium Club sets that are the first issue of the brand in football and hockey. I also have a 1989-90 Hoops set and I'm close to finishing my 1986-87 Fleer basketball set (in a matter of speaking). Let's not forget that I'm chasing some Topps baseball sets that include other teams beside my beloved Reds. So it's no surprise that while I'm finishing up my Red's Man Cave that there will probably be a few items that are Red specific. The first is this tin sign my sister picked up for me years ago for a Christmas gift. I love the subject matter of the sign...Shoeless Joe Jackson selling shoes, that's awesome! I love nostalgia and these tin advertisement signs just ooze with it. There are a couple of other signs I would like to purchase for the cave but you'll have to wait another day to find out what signs I want to add.
Posted by Reds Card Collector at 10:47 AM 4 comments:

I've always wanted to go to Opening Day. It's been on my bucket list for years. Each year I register with the Reds to enter a lottery to purchase tickets because it's not practical for me to purchase season tickets or one of their other ticket packages when I live more than three hours from the ballpark. Luckily, my in-laws had a couple of tickets that they had purchased a while ago since my mother-in-law is a Rosie Red member but she had made other commitments and forgot about the day of the game. They were gracious enough to offer me a ticket and I can't thank them enough for the opportunity to attend my first Opening Day game. 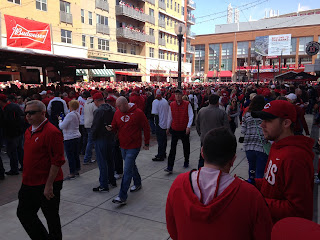 Each year the city of Cincinnati has the Findlay Market Opening Day Parade. I had no desire to see the parade since I knew it would last around 2 hours and we would be pushing it to make it into the ballpark before the first pitch. I did see one of the concerts and the block party that was going on just outside the stadium. 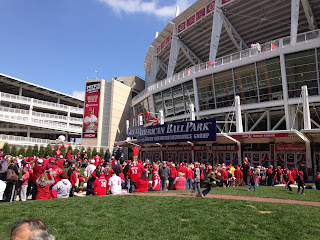 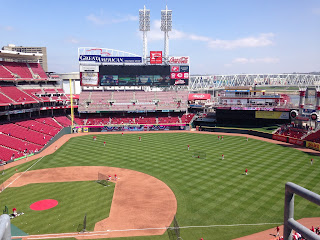 We were able to make our way around the park without any problems since a lot of fans were still outside the stadium enjoying the parade and concerts. We were able to catch the Phillies batting practice, something I hadn't done at a game since days of Riverfront. 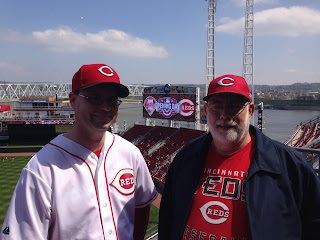 And here's my first selfie on the blog. Many thanks again to my in-laws for the ticket. My father-in-law was gracious enough to attend the game with me. 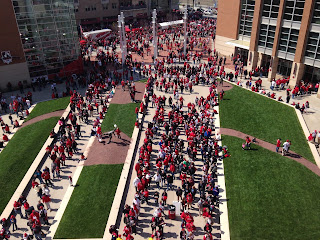 I am thankful that we decided to get into the park early because the lines only got worse as it got closer to game time. Here's a view looking down from the ballpark to Crosley Terrace that sits at the main entrance of Great American Ballpark. 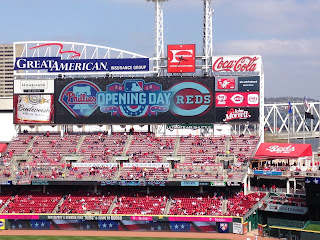 While a lot of people only wore jerseys and t shirts, the scoreboard said the temperature was a brisk 55 degrees. Being originally from Cincinnati I knew that it can get cold when the wind is coming off the banks of the river. I'm glad I brought a jacket because by the time we left the game the temperature had dropped to 40 degrees. 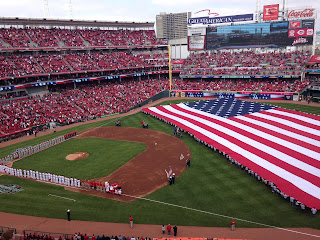 I wasn't use to the elaborate player introductions of Opening Day. Normally the announcers race through the rosters but it was great seeing the coaches, bench players and starters honored. What EVERYONE found odd during the intros was the fact that Joey Votto didn't come out of the dugout when his name was announced. Apparently Bryan Price had no clue where Votto was and I his absence miffed some of the fans. The national anthem was spectacular with the giant American flag unfurled in the outfield by members of Cincinnati's Fire Department. 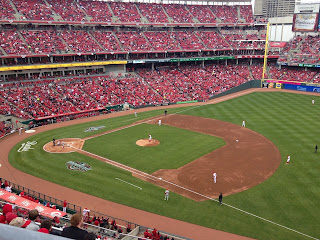 It was icing on the cake that I was able to witness a win on Opening Day. I'm glad I can finally mark that off my bucket list. 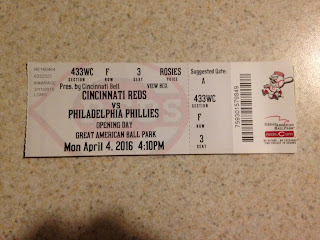 And I have a nice souvenir to add to my Reds collection.

Posted by Reds Card Collector at 8:58 AM 6 comments: