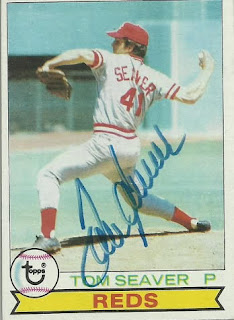 Tom Seaver aka "Tom Terrific" is one of my most favorite autographs in my collection.
Posted by Reds Card Collector at 9:00 AM No comments:

Email ThisBlogThis!Share to TwitterShare to FacebookShare to Pinterest
Labels: Through the Mail, Tom Seaver 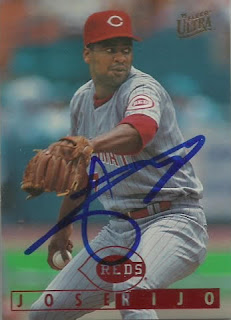 Another baseball season is in the books. While I'm less than thrilled that the Giants won the World Series this year, I suppose it could have been worse (i.e. the Cardinals being crowned World Champions). Regardless, I've been pondering the "What could have been" had the Reds only taken one more game from San Francisco in the NLDS. It's been a loooooooong time since the Reds have made it to the World Series (1990) when Jose Rijo helped Cincinnati win a World Championship and himself winning the MVP in the 1990 series.
Posted by Reds Card Collector at 9:00 AM No comments:

Email ThisBlogThis!Share to TwitterShare to FacebookShare to Pinterest
Labels: 1990 World Series, Jose Rijo, Through the Mail 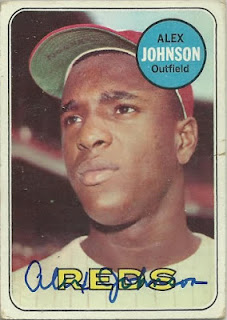 Can't go wrong with a vintage card with a signature on it. Just a little disappointed that Alex decided to sign over the "Reds" text on the card.
Posted by Reds Card Collector at 5:22 AM No comments:

Email ThisBlogThis!Share to TwitterShare to FacebookShare to Pinterest
Labels: Alex Johnson, Through the Mail 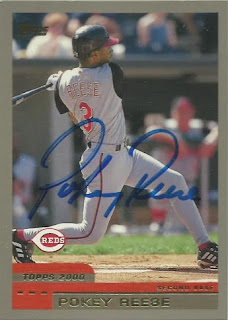 Still sad that the Reds traded Pokey to the Pirates, but happy he won a World Series with Boston in 2004...especially since the Red Sox defeated the Cardinals that year!
Posted by Reds Card Collector at 9:19 AM No comments:

Email ThisBlogThis!Share to TwitterShare to FacebookShare to Pinterest
Labels: Pokey Reese, Through the Mail 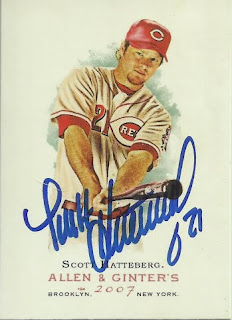 Allen & Ginter's are great for autographs and this Scott Hatteberg is one of my favorites in my collection.
Posted by Reds Card Collector at 5:26 AM No comments:

Email ThisBlogThis!Share to TwitterShare to FacebookShare to Pinterest
Labels: Scott Hatteberg, Through the Mail 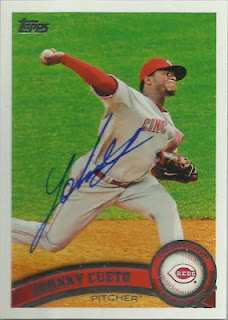 I've finally gotten around to scanning my autographed baseball cards and, as a result, I've decided to start a new series on my blog - Through the Mail! In the past I've provided a short blurb about the player when I've posted their autograph, but I've decided against that with this series. I will, however, include a link to their profile on baseball-reference.com. So, without further ado, Johnny Cueto!
Posted by Reds Card Collector at 7:39 AM No comments:

Email ThisBlogThis!Share to TwitterShare to FacebookShare to Pinterest
Labels: Jonny Cueto, Through the Mail 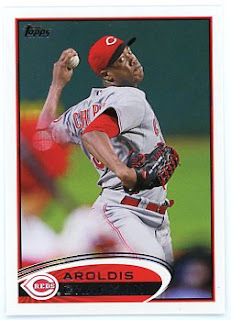 I knocked out another of my 2012 Card Collecting goals today with the completions of my 2012 Topps Reds team set. Even though it was the the easiest on the list to knock out, it's still a great feeling to know that it's one less thing to worry about in terms of my collection. As I mentioned before in previous posts...I'm not a fan of this design. 2011 Topps "I Love"...2012 Topps "I Barf"!!! I can't stand the surfboard design. I will say that I'm looking forward to next years set since I think the design is a home run for Topps (not a grand slam, just a home run). Anyway, I'm keeping my fingers crossed today that the Reds can pull out a victory against the Giants to move on to the National League Championship Series, but with the offense being as anemic as it has the past two games I'm not holding my breath.
Posted by Reds Card Collector at 8:45 AM No comments: 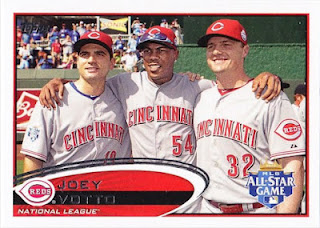 As the 2012 baseball season comes to a close and the start of the post season is on the horizon, it's time to take stock of the recently released 2012 Topps Update series. One of my 2012 Card Collecting goals is to wrap up the 2012 Topps Cincinnati Reds team set. While I was taking a look on eBay today to determine what cards I needed from the latest release, I was struck with terror as I saw Topps had released a short print of the Red's All-Star first baseman. First words that came to my mind, "Crap, not another short print!"
When Topps started including short prints in their base product a few years ago I thought it was a pretty cool idea. But as time has gone by and Topps has started releasing the SUPER short prints, my acceptance of the short print has begun to evaporate. There are two things that have made me a content collector with Topps flagship product: history and affordability. While the history is still there with over sixty years of product, the short prints are starting to put a nix on affordability. Spending more than $20 on a baseball card from the current year release is ludicrous to me. While I've been fortunate so far to not experience this problem (sorry Angel's collectors with your 2012 Pujol's SP), I fear there may soon come a time when I'm faced with this problem. That, in turn, will definitely lead to some serious soul searching regarding what should actually constitute a true team set.
Posted by Reds Card Collector at 9:33 AM No comments: