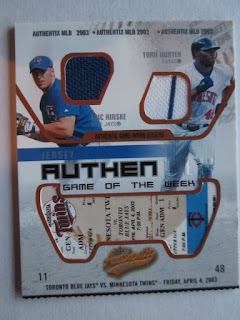 It's not very often that I change my mind when it comes to things. Once I decide something I try to stick with it (in terms of my collection anyway). This helps me to stay focused and prevents my collection from growing out of control like a giant blob gobbling up my funds and leaving behind nothing more than despair and destruction. A while back I had posted that I was trying to complete the 2003 Fleer Authentix set with the exception of the relic cards. While I had intended on sticking to that goal, the more I thought about it, the more I realized that I really liked the look of some of those cards. Granted, I don't like everything that's in that set (the Hometown Hero subset) but there are plenty of cards that I like. Case in point, the Game of the Week is a 10 card relic set that consists of two jersey swatches from two separate players with a replica ticket that's embedded in the card. You can either get the common "ripped" version or the more limited "unripped" version that's limited to 50. 2003 Authentix also has a 10 card bat relic set and a 25 card jersey relic set. Each of these sets only include 1 relic from a player with a replica ticket embedded in the card. There are "ripped", "unripped", and "All-Star" variations with those cards. So after a lot of thought, I've decided to chase those relic sets because it comes down to the first rule of collection...collect what you enjoy. I definitely enjoy these cards. Besides, with the way technology is going, I'm sure there will be a day in the not too distant future when you can't even get a paper ticket to go to a game. Instead you'll be required to get an electronic ticket on your smartphone.
Posted by Reds Card Collector at 10:31 AM

Shoot me an email! I have one of those relic cards for you

Good luck!
That day is coming and for at least one team is already here. The Miami Heat in the NBA are electronic ticket only as of the 2017-18 season.

Thanks JayP. I sent you a message :)

Thanks Billy. I know that Quicken Loans arena here in Cleveland is electronic ticket only. If I want to go to a Cavs or Lake Erie Monsters game there's no way I can purchase a paper ticket.

I don't think I've used an actual printed ticket in years which totally sucks. I love collecting ticket stubs. But I always buy my tickets online, so I either get the print out your own tickets or use the app on my phone.

P.S. Best of luck on grabbing these relics. I like these cards.