Glad There's Only One! 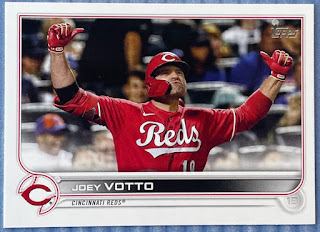 For the past couple of years Topps had a tendency of including two or more Reds short prints in their series 1 release. That made it a pain to try and track those down for my Reds Team sets just because they normally set me back $20 or more a piece. That adds up after a while. Don't even get me started on the super short prints. Luckily, this year Topps only had one Reds short print included but it was a doozy since Votto has had a resurgence among some collectors and the price of his cards have gone up considerable...even for new release product. Thankfully I know have this card in hand and won't have to worry about trying to track down any more short prints until series 2 is released. Of course, the way things are going with the players and the owners right now I wonder if there will be a series 2.
Posted by Reds Card Collector at 11:04 AM

Regardless of whether or not games are played... Topps will be releasing a Series 2 and Update. Lol... they're all about making that money. Whether or not collectors will be buying or hoarding them is an entirely different thing.

Thanks Fuji. With Fanatics now at the reins of the sports card industry I wonder if the print runs will continue to be astronomical or if we'll see them back off on the quantity produced and number of products released.